Our flight to Chicago was a little bumpy but otherwise uneventful. The man who sat next to Jeff was fun and interesting to talk with – and we bonded by helping him with his Fitbit and Fitbit app. Hahaha!

We have less than an hour to change plans in O’Hare and are hoping to be able to grab a bite to eat. Of course we pack snacks, but the carrot sticks are almost gone and we’ve put a dent into our bag of peanuts.

When we deplaned we found an arrivals/departure board and discovered that the plane we had just gotten off was the same plane we would take to Orlando – and we have the same seats! How weird is that?
Well, there was no time for food, just a quick bathroom stop and off we went. We definitely needed something to eat so each of us got a hummus and crackers snack on the plane and finished off our carrots with the hummus. Dessert was apples that we brought from home. This flight was a little longer than the first one, but soon we were touching down in Orlando.

Got our rental car and drove about 5 minutes to the Holiday Inn Express at the airport. Actually, it was a little more dramatic than that because we were relying solely on my phone’s GPS for directions and had no connectivity until out of the parking garage and actually driving who knows where. This led to a wee bit of snarling as we struggled to figure out how to sync the stupid phone to the car’s Bluetooth as we drove wherever the road was going. All eventually worked and we were soon on track. We knew the flight was scheduled to arrive late in the evening so made reservations close to the airport. I’m so glad we did because we are tired.

If you’ve read any of my other blogs you’ll remember that we almost always stay at Holiday Inn Express properties. Free breakfast, free wi-fi, and I am a “platinum” member so sometimes the rooms are free! In all of our stays, we’ve never had a room like this one. There was the normal king sized bed and little couch/sitting area – 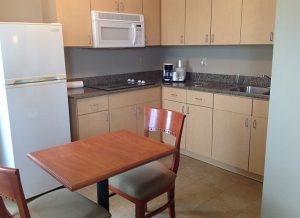 but, around the corner was a small but full kitchen! Of course, I had to take a photo…

We haven’t bother to unpack because we’re staying just one night and it is 1am. Time for bed!