We had to get right up this morning because though we are returning here after our all day tour, we need to check out. Happily we have our car and can stash our luggage there for the day. We have a quick breakfast of instant grits and instant coffee which we brought with us; load the car and stand in the drizzle waiting for our driver. It’s cold!

We are his first pickup (8:45a.m.) and soon the little van is almost full. Our driver, who’s name is unpronounceable as well spell, tells us just to call him Number 1.  Number 1 is a true Viking and his family has been in Akureyri for hundreds and hundreds (thousands?) of years. He points out the island that his family owns and lives on; the mountain that was left to the family by is maternal grandmother and is very knowledgeable. Turns out he is also an opera singer!

Apparently singing is very important in his family and his grandfather was a noted Icelandic singer in his time.

We mention having had dinner last night at the fish and chips restaurant and he asks how it was. “Delicious” “We’re still full”. He is pleased and then tells us that his family owns that restaurant and if something weren’t right he would tell them.  His brother owns the local flight school.

The ride to Myvatn is about 90 minutes, but we don’t go straight there. In fact, there really isn’t a “there” to Myvatn as there is no town. It is close to Husavik. The point to Myvatn is that it is known as Iceland’s Yellowstone (though on a much smaller scale.)

Our first stop is the dramatic waterfall, Godafoss Waterfall which plays an important part in the Icelandic sagas and in it’s history. In 1,000 A.D. the speaker of the Alpingi (government back then) had to decide whether Iceland should remain pagan or convert to Christianity. He choose Christianity (under duress from Norway) and to show that he was serious about his decision, he became a Christian, went home and got all his carved pagan statues and tossed them into the waterfall; the name of which translates to “Waterfall of the Gods.”

Godafoss isn’t very tall (maybe 40 feet) but it is about 90 feet around and feels huge! 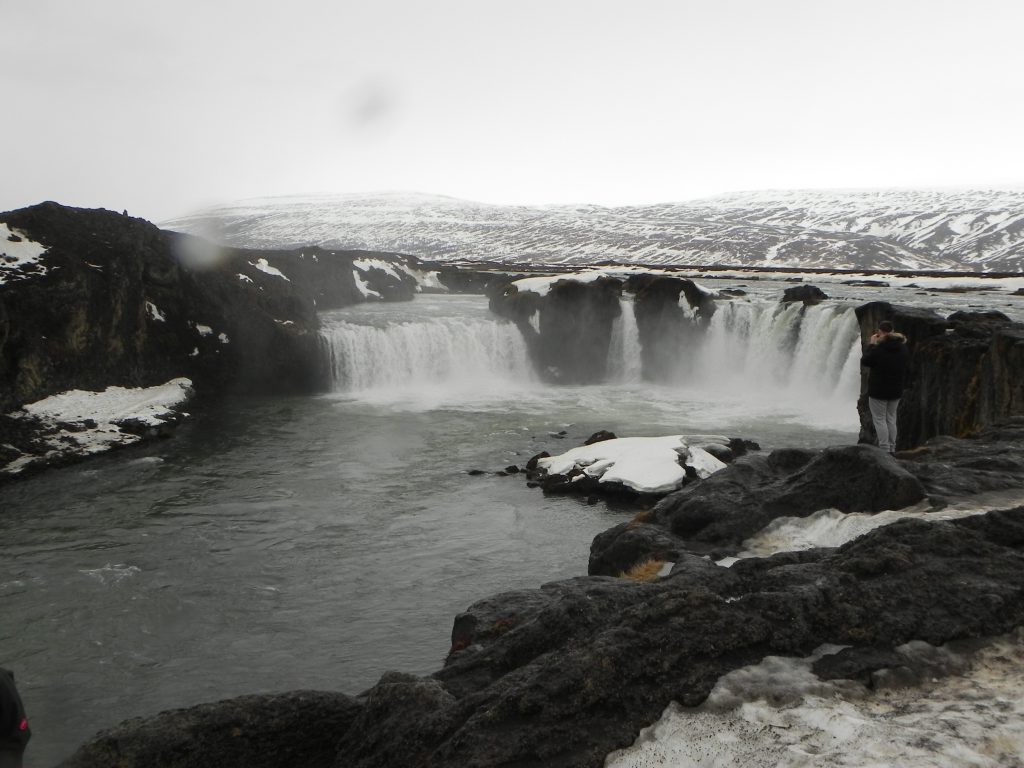 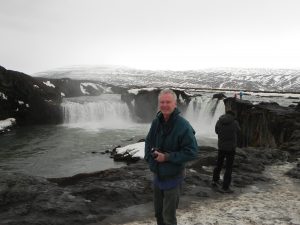 We all took many photos, and soon were on our way again. Number 1 asked if any of us were “Game of Throne” fans. No one in the van was, but he stopped at the Grjotagja Thermal Cave. Apparently this is a well known filming location for Game of Thrones. 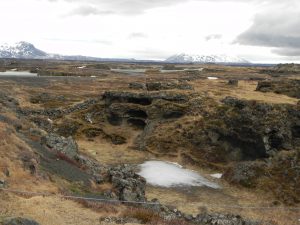 I took this photo for those of you who would like to see the spot. You can get down into  that crevasse into a steaming pool but it was really uneven footing and no guardrails or barriers, so none of us walked down. This was a short little stop.

I’m excited about our next place. Actually, I’m excited about the whole tour because these are all the things I had hoped to see in Myvatn (well, except for the Grjotagja thermal cave). We arrive at the Skutustadir Pseudocraters, which for some reason, I insist on calling “pseudo cones.” Oh! Pseudocraters are also called “rootless cones” which is probably why I keep confusing the name. Anyway, these aren’t real volcanic craters, but they are what is left of gigantic bubbles of molten lava. 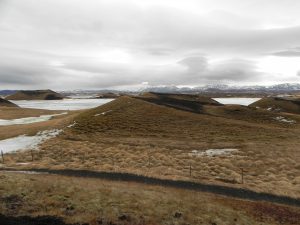 Water under the lava boiled into steam, rose to the surface and then popped! Except for one place in Hawaii, this is the only area in the world where pseudo-craters can be found. There was a nice trail around the area; and there was a second, much longer trail for birdwatchers. 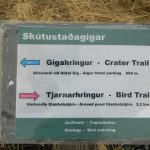 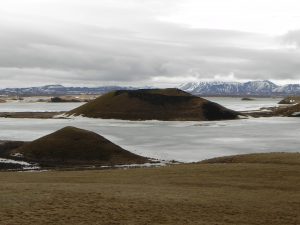 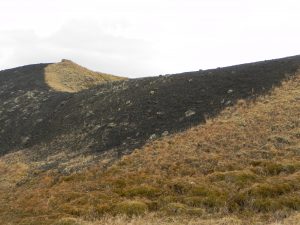 I think they look like little volcanoes. It was a nice half mile walking trail and there were a couple of places with stairs up to the rims of the craters.

When Jeff, Tom and I were in Iceland in November 2016, we visited Pingvellir,  a rift valley where the North American and the Eurasian tectonic plates are pulling apart. There was an enormous valley between the two walls.  On this sightseeing trip, we are once again at a rift between the North American and Eurasian tectonic plates! The gape in the Earth’s crust was a bit unsettling and the gaping trench was deep, deep, deep. This rift is tiny compared to Pingvellir, but somehow I found it more powerful. 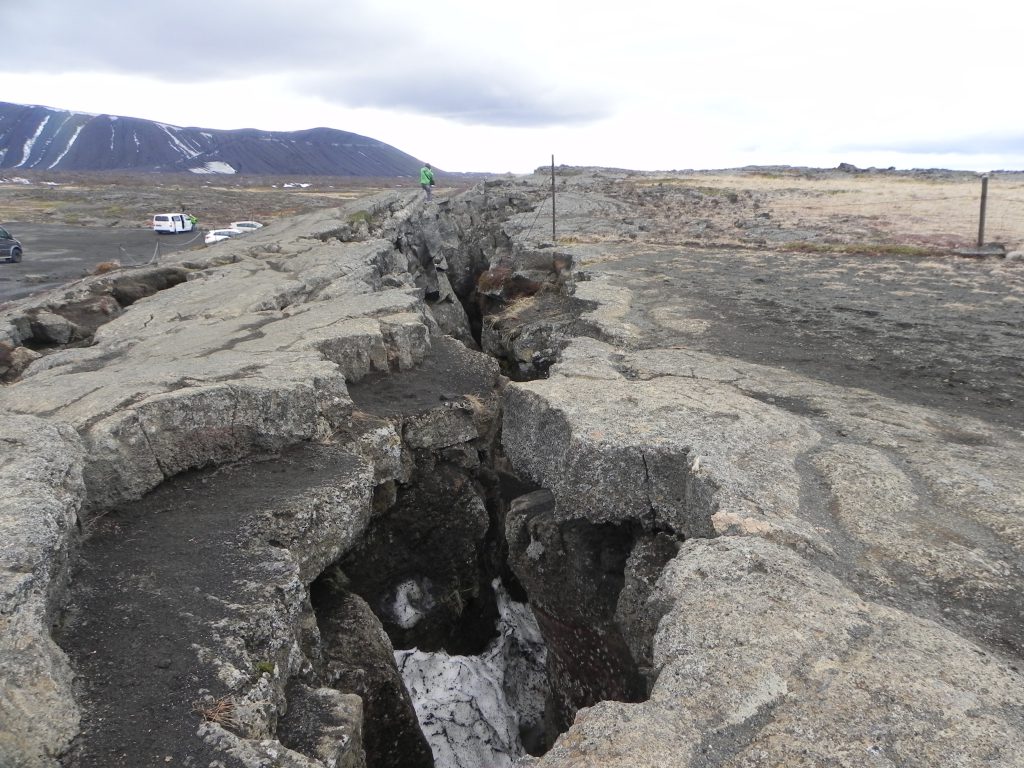 Tom bravely straddled the rift and while the sides are not far apart it was scarier than it looks! 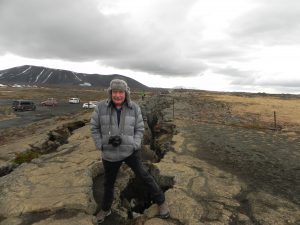 Number 1 told us that under the rift, there was a thermal cave with a pool and a river. It is unmarked and you aren’t supposed to go into it. So, of course, Jeff and I did. It was a steep climb in near darkness, but worth the trip. I did keep thinking though “if there’s a tremor now, I’m dead.” 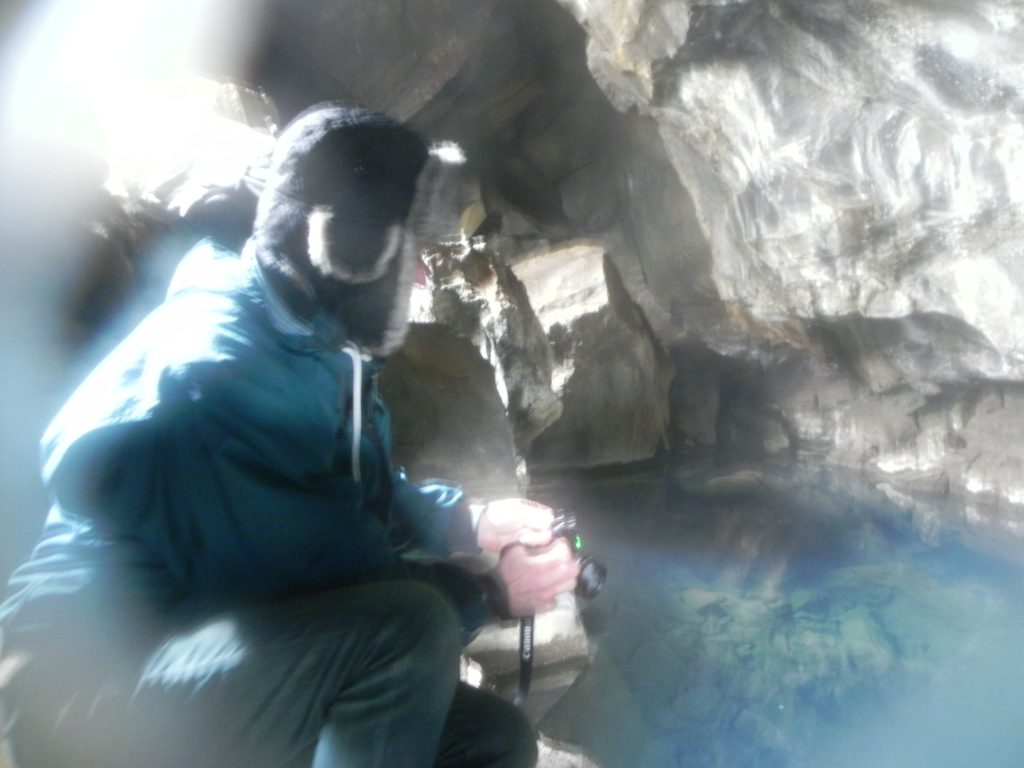 I crouched down close enough to get my fingers into the water, and it was very hot. What an amazing place. Getting out of the cave was tricky because of the low rock “ceiling” which you can’t really see here because Jeff is almost out. 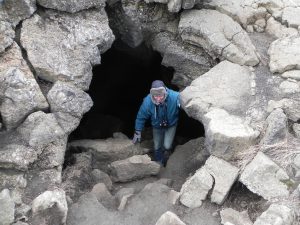 Back into our little van… and we are off to the Dimmuborgir lava formations. I’ve never heard of these and I think if the three of us had been on our own, we might have missed them. “Dimmuborgir” translates as “Dark Castles” and it is aptly named.  First of all, it is cold, overcast and a little rainy; second, they are definitely ‘dark’. 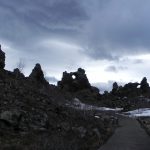 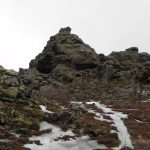 According to the sign I read (the signs are all in Icelandic and English) this whole area was underwater. It was a huge lake, and then magma leaked up and solidified forming  spiky, stalagmite columns. 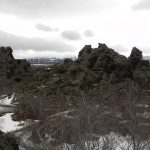 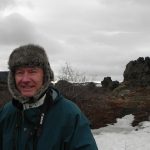 There were a lot of walking and hiking trails here and we opted for a short 15 minute one. It got cut short because the path was covered in snow and ice and was slick. Brrr…

Like I mentioned earlier in this post, the area around Myvatn is very active geothermally. And our next stop was the Namafjall geothermal area. This area doesn’t have a spouting geysir like the one we saw in November 2016 at Geysir, but it pretty much has everything else! You practically have to plug your nose becuase the smell of hydrogen sulfide is so strong.

There were fumaroles which look like stacked rocks spitting steam

Here’s a couple closeups of the fumarole and 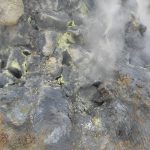 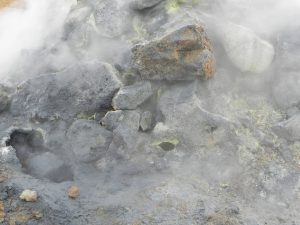 a photo of Jeff standing in the warm (but smelly) steam it is putting out. 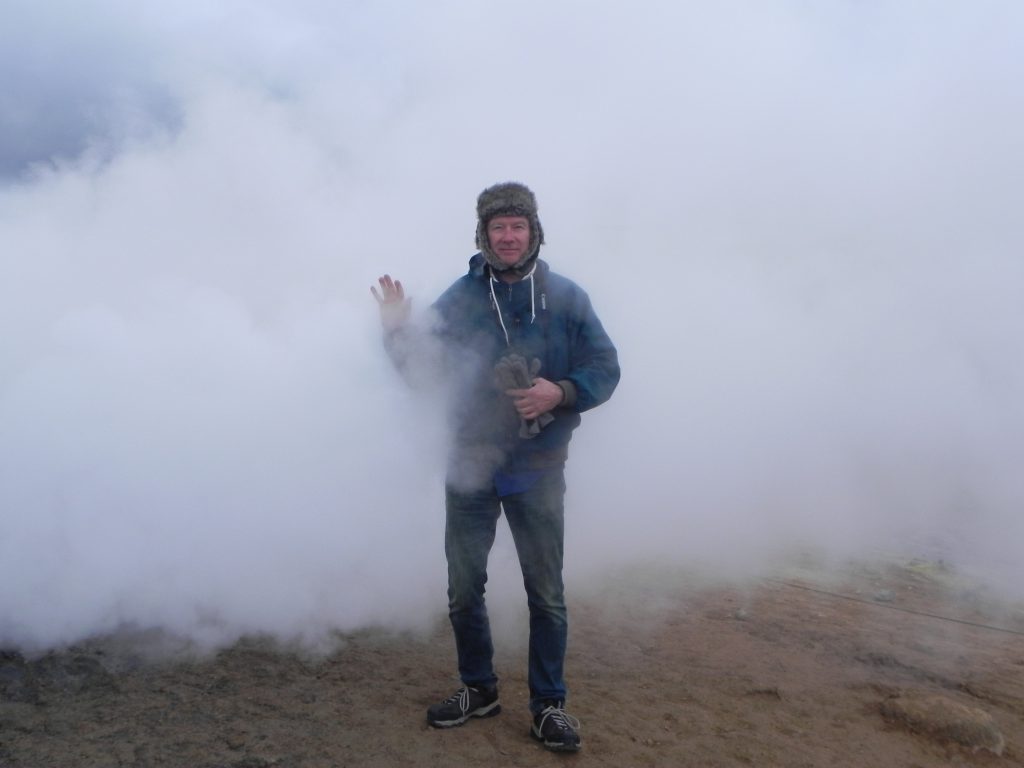 There were mud pots and because of all the sulfur and chemicals in the soil, the terrain was pretty colorful.

What there wasn’t, was no crowds, very little signage and kind of beaten down areas where it was safe to walk. A couple of the very dangerous spots had wooden walkways, but not the over abundance of cautionary signs you’d see in the United States.

There are two big pools with rocky walls and a semi-rough pebbly bottom and when you are in it you can see out over the volcanoey countryside. You can see black rock and steaming vents which would make me think twice before taking an unguided walk in the area.(pg 301-311)

Apparently the water here is the naturally heated excess from a nearby geothermal power station. It’s fresh water and relaxing in it was wonderful!! Getting in, was not, however, wonderful.  When we visited Iceland previously, we went to another nature bath and we knew the ‘rules.’ First of all, you take off your shoes in the hallway and put them onto racks,a and hope you can remember where you put them.When you check in you get a tag or something with a locker number on it and that’s where you put all your clothes and stuff.  Everyone has to shower naked, with soap, before entering the baths; so you put your suit on after you shower. There are women in the locker room to be sure everyone does this. The final step, and, this was not fun today, is scurrying from the exit down outside into the bath. BRRRRRR…. It was windy and cold! But we remembered that the last time, we had also had to content with ice on the walkway in and were happy that it wasn’t that cold.  I think we were in the baths about an hour and I could have stayed an hour longer. Tom, Jeff and I walked and floated around, searching out hot spots and made our way to the divider between the two pools. The other pool seemed much cooler than ours, so we stayed put.

When you get out of the pool (reverse freezing run back into the building) you shower to get the sulphury water off you, your suit and out of your hair. Then you have to dry off completely before going to your locker. This keeps the locker room floor nice and dry.

Oh, so relaxing!! Because I knew we’d been hitting some thermal pools, I packed our waterproof beach bag and everyone’s suits, water shoes, shampoo, hairbrushes were in there for easy handling. I let Jeff and Tom take the bag since there were two of them. Jeff said carrying the gaudy striped beach bag didn’t make him feel very manly. LOL

Speaking of bags, between the three of us we have 3 backpacks, a camera bag and a beach bag. Tom bought a few things at this stop and when he added that bag to our stash, which took up all the space between the driver and passenger seat, Number 1 said “More bags?! You have so many bags!?”

As we start our return trip to Akureyri, Number 1 points out our hotel. Super nice of him and know we know we’ll easily find it.  He talks about Myvatn while driving. Myvatn is famous not only for the geothermal aspects of the area, but also for the “midges”.  You know, midges, teeny tiny aquatic flying bugs? Well, in the summer here everyone (locals and tourists) wear nets over their heads to keep the midges out of their ears, mouths and noses. They don’t bite, but apparently there are massive swarms of them that even make driving difficult as they obliterate windshields when you drive into a swarm. Ick.

Soon we’re back in Akureyri and as Number 1 drives away, Jeff and I walk up to the guesthouse. We’re hoping that the front door is still unlocked and we can use the bathroom. It is and we do!  Then, we walk back down the hill a ways to the Vinbuden (liquor store) to stock up before we hit the road.

Jeff is driving, Tom is riding shotgun and I’m in the back and we retrace our steps back to Myvatn and the Foss hotel.

Wow! This hotel is super nice and modern (and expensive).  There is a fancy lobby with a nice restaurant and bar, and elevator and on the second floor where we are, there is a sauna. The door locks are electronic keys which are very common in the US, but not in Iceland. Tom’s room is just down the hall from ours and we all have a very nice view of the pseudo-craters.  The wind has picked up and it is cold out as we lug our stuff in.

As I mentioned earlier, there is not a “town” in Myvatn, so no nearby restaurant except the hotel eatery.  We check the menu, expensive! Always prepared, we regroup in Jeff and my room and enjoy our inexpensive ‘just add water’ dinners.

We don’t have any plans for tomorrow, but please check in to see what we’ve been up to.