Today we are in Puntarenas, Costa Rica, or as Jeff calls it, “home!” During some of our previous trips to Costa Rica we’ve been to Puntarenas and we know for a fact that there is pretty much nothing here. So, any shore excursions will require long bus rides.

And, because we know this area so well, the only reason we sign up for an excursion is because we have so much on-board ship credit to use up. And, though we’ve been here 4-5 times, we’ve never really played tourist. This will be fun! We will be going to the cloud forest; someplace we’ve never been.

Before leaving the ship (and we had talked to our traveling companions yesterday about it) Jeff and I decided that when we get back from our excursion, we’ll catch a cab and take everyone to Playa Dona Ana – a beach about 10 minutes away that we know well and that has MANY monkeys. Eve and Leroy have an all day excursion, but Mary and Trish are interested. This morning there is a sticky note on our door that says “Monkeys? Yes! See Mary!” Good! We’re excited to share this with her.

Here are some facts about Costa Rica that we learned while on our bus ride:
1. Costa Rica is the 2nd smallest country in Central America and is about the size of West Virginia.

2. The peninsula at Puntarenas stretches from here to Panama.

3. Today there are 5 cruise ships docked in Costa Rica (so the vendors are very happy)

4. May to November is the rainy season. On the Caribbean side of the coutry instead of a rainy and dry season, they have a rainy season and the rainier season.

6. In 1502 Christopher Columbus sailed into Limon – he was lost. The 1st Spanish settlement was on the Pacific side.

7. Costa Rica became an independent nation (I assume from Spain) on September 15th 1820.

8. Costa Rica had one particular crop – coffee! Arabica coffee trees grow from sea level up to 3,000 feet and the volcanic soil is the perfect growing medium. Coffee was taken from the mountain fields by oxcart to the port in Puntarenas. Children of the families who made money in coffee went to Europe and became highly educated. They became the visionaries – and they developed a railway that went from coast to coast.

9. There are 119 volcanos in Costa Rica, nine of which are still active.

10. In April, 1991 a 7.2 magnitude earthquake hit Costa Rica. The quake destroyed roads and damaged the railroad which was subsequently abandoned. The fact that the then President of Costa Rica had interests in the trucking industry I’m sure had nothing to do with that abandonment.

11. Costa Rica’s coffee industry did not do very well because, being such a small country, their product was overshadowed by Colombia’s exports.

12. The United Fruit Company came into Costa Rica and the banana industry was developed. Have you ever had a Chiquita banana? It probably came from Costa Rica.

Now, Costa Rica has diversified….the #1 export is pineapple, bananas are #2. Coffee exportation is #6. Every year in Europe at an international coffee market, coffee usually sells at 100 pounds for $100. But last year a Costa Rican farmer sold 100 pounds for over $4000 to a Japanese businessman who has a boutique coffee shop!

In services, the manufacture and the exportation of medical equipment, such as catheters, #1. Number 2 is the tourism sector.

Our guide today is Eric, and he tells us that out of the over 900 species of birds including toucans, parrots, and quetzels, the national bird of Costa Rica is the Robin! And it isn’t even the red-breasted Robin but a plain brown Robin.
And, despite having mammals like coatis, sloths, jaguars, and monkeys of many species, the national mammal is the white-tailed deer.

From this I can only assume that these people have no imagination.

Our tour bus goes right past Magallanes! And now we are driving through downtown San Ramon!! Home!! This is so cool!!

Eric tells us about Jose Figueres Ferrer who was originally from Catalina, Spain. For some reason he was exiled to Mexico in the 1940s for four years.  When he returned to Costa Rica he organized the farmers and laborers, and worked to bring down the dictators in Latin America. He led a coup and became the president of Costa Rica.
During his presidency he rewrote the Costa Rican constitution and extended voting rights to the indigenous people, women, blacks, etc.

On December 1st, 1948, during a speech, he said, “Weapons will lead you to victory, but words will lead you to freedom” and abolished the army. The military money was put into healthcare, education and conservation. It took him only eighteen months to accomplish all this and then he stepped down and then declared open elections. After the first president was elected and that term ended, Jose was elected to the presidency twice more and is the only person to hold that office for three terms.

Costa Rica is suffering some of the same migration woes as the rest of the world. About 90,000 people are needed to harvest the coffee and Costa Rican’s won’t do it because it doesn’t pay well. Nicaraguans come in for the harvest because they get paid a lot more in Costa Rica than in Nicaragua. The coffee grown in Costa Rica is grown on micro-farms that are usually part of a coffee cooperative.

We learned all this on our ride to the cloud forest of Parque Adventuras in San Luis.

We arrive at the park and begin our very fun day. We first come upon a whole slew of hummingbird feeders and about a million hummingbirds – all different varieties, slurping up the nectar and squabbling over feeders. These little suckers are difficult to photograph!

We hike and cross multiple suspension bridges..which sway in the middle as you walk across above rivers and jungle.

The number of people permitted on the bridges at a time is limited – I don’t know if this is because of weight restrictions or the swaying, and I don’t ask!

As our tour ended, we entered a lovely butterfly pavilion. The butterflies were not as difficult to photograph as the hummingbirds, but still tricky. I saw Jeff taking a picture of some woman’s head. Turns out that a butterfly landed on her hat and her phone was in her bag. She called out to Jeff. He retrieved her phone and got a good photo of herself with it. 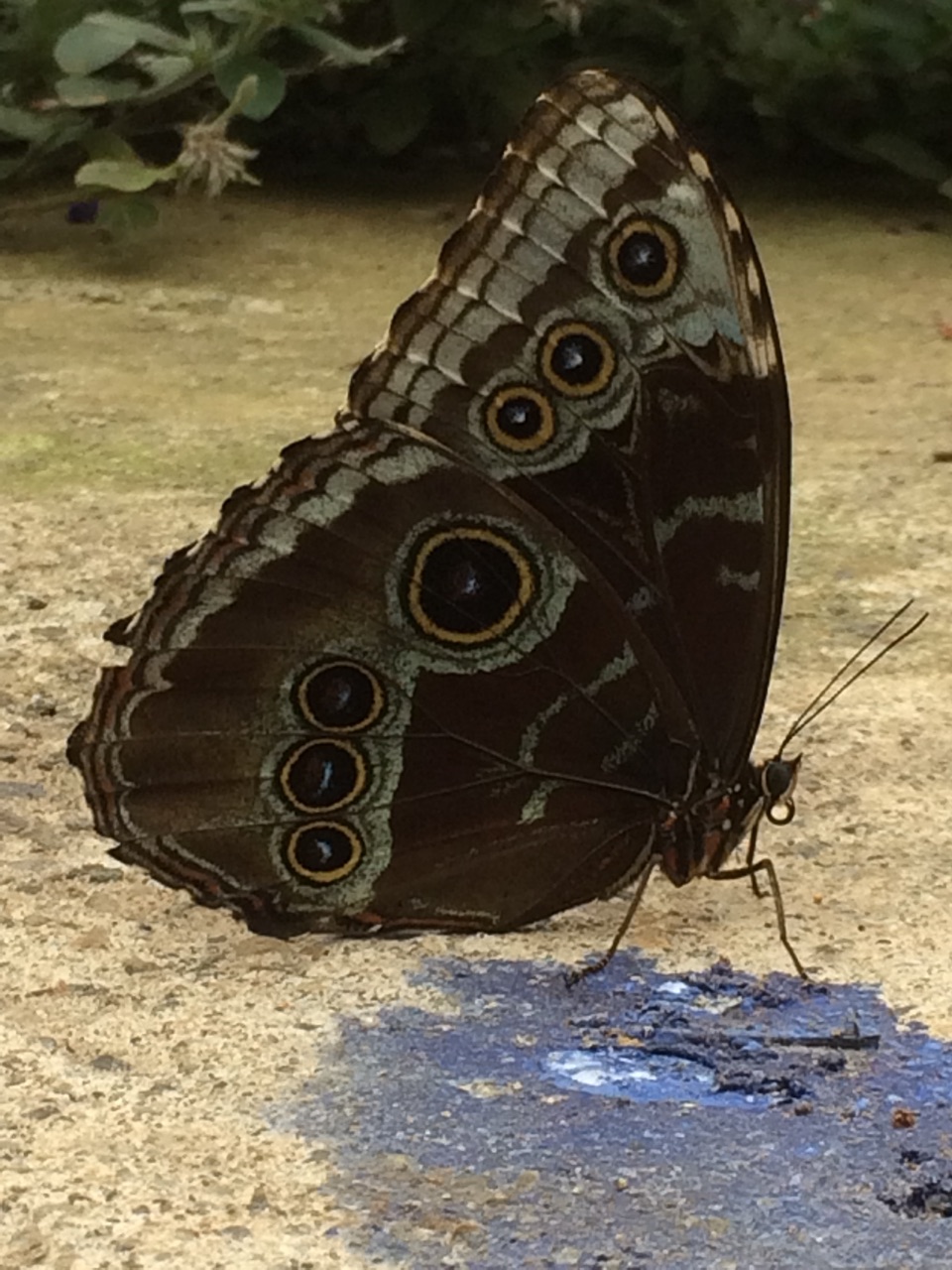 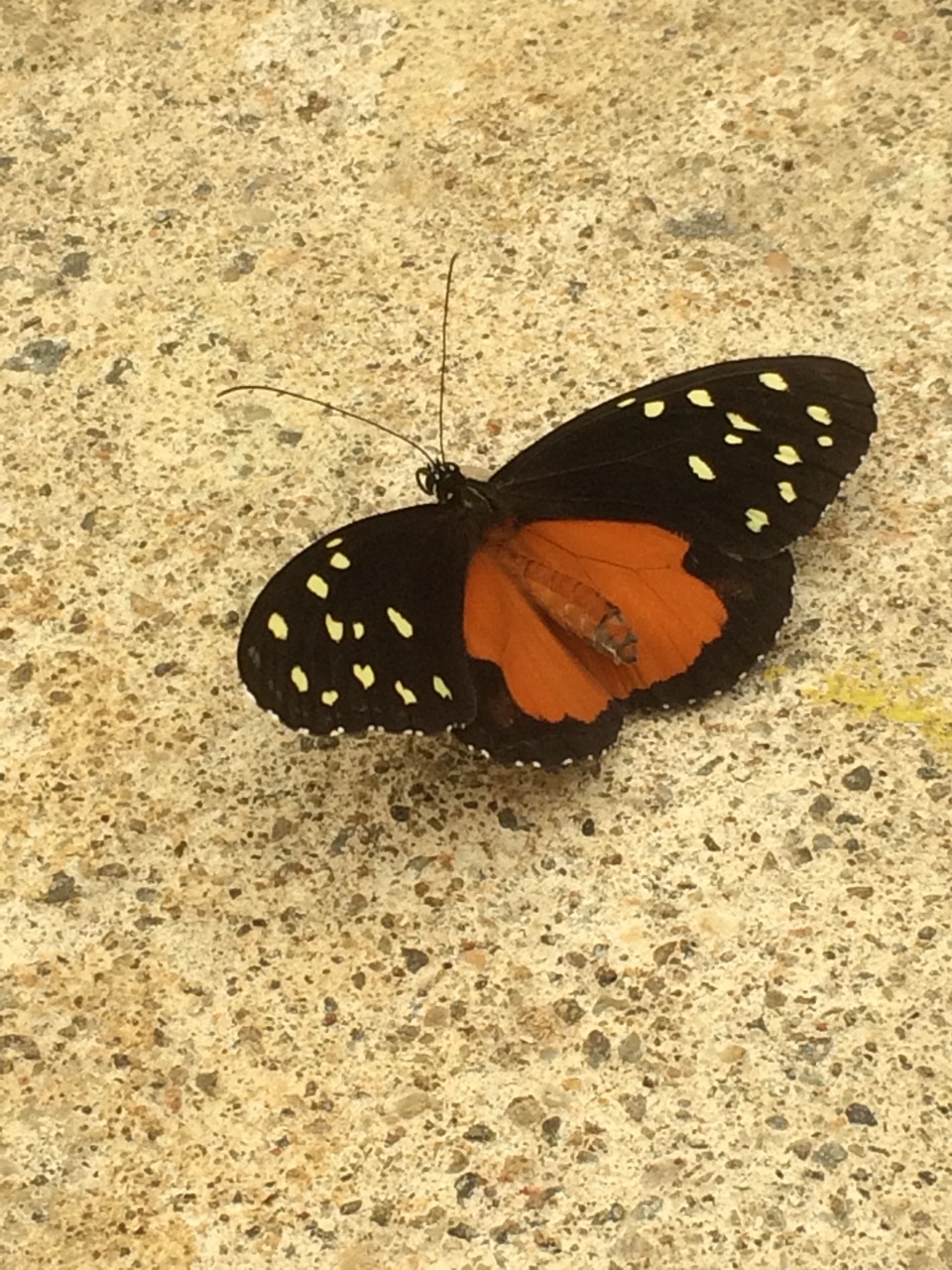 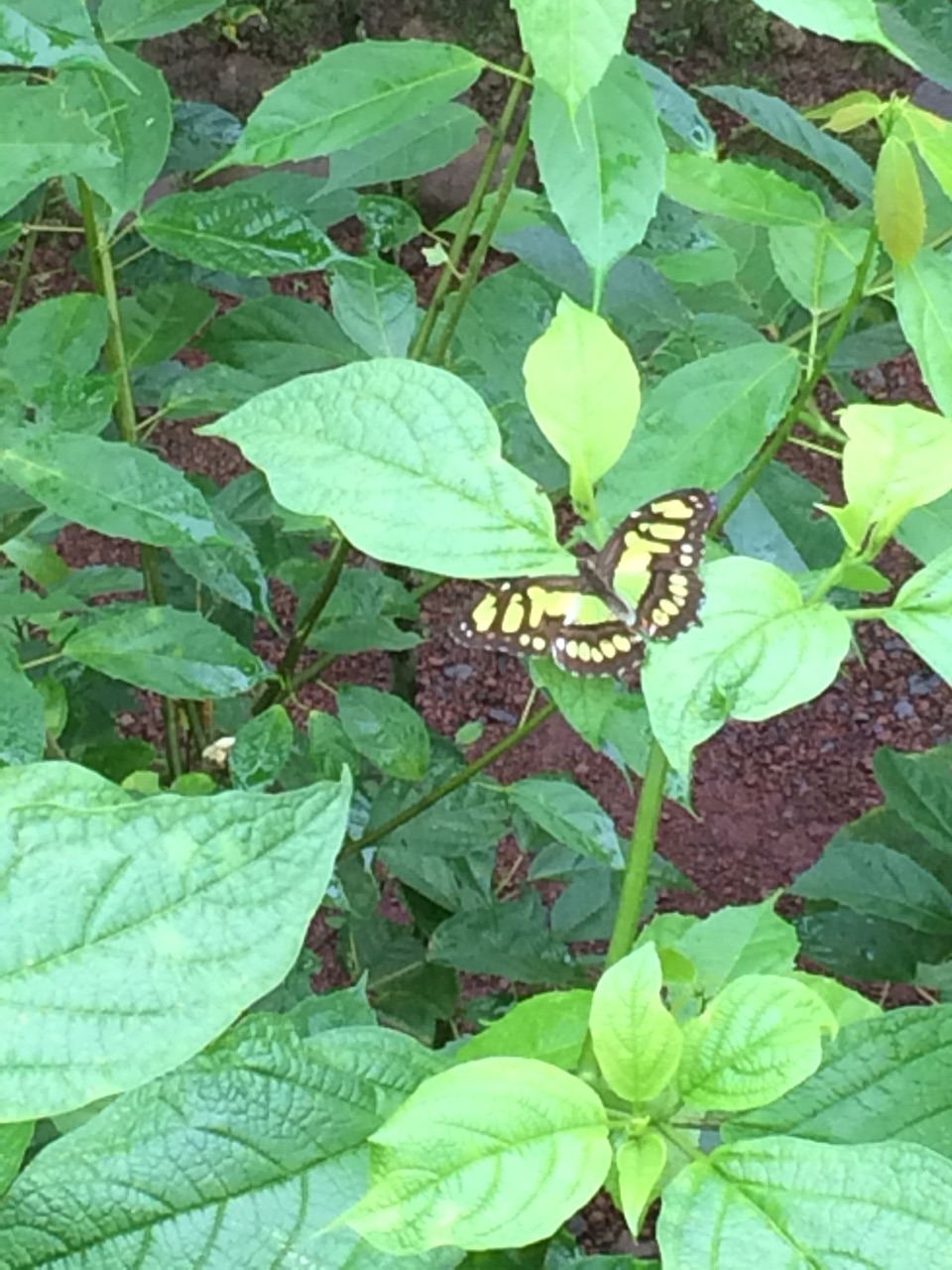 I was concentrating on getting a good picture of the blue morpho. It wasn’t until we were leaving the area that I spotted one resting in the shrubs way down low next to me.

I got a good picture and a short video (which I’ll try to post when I have faster Internet.)

Our hummingbird, swinging suspension bridges and cloud forest tour took about an hour and a half after which we went to an outdoor restaurant area and had snack of homemade tortillas and cheese, fresh papaya, watermelon, pineapple, and a very tasty little cake-like thing made of corn, coconut, cream and sugar, along with glasses of blackberry juice. YUM!

Time to get back on the bus. On our way back to the ship, the bus stopped at a souvenir shopping area – a place right past “our neighborhood” (Magallanes). This is a store we’ve driven past many times and now we know what’s inside! I have needed a new la gorra (baseball cap) so I bought myself a Costa Rica cap. We picked up a bag of coffee, I got two more baseball caps, one with a sloth and one with a monkey for some little friends back home and Jeff got a cool box to either give as a gift or that we’ll keep as a sugar bowl. We stuff the treasures into my backpack.

Back to the ship a little later than planned we find a note on our door from Mary saying she is sorry she missed us and she’s gone into Puntarenas to find the post office. Bummer! Jeff and I decide it wouldn’t be much fun to go to Playa Dona Ana by ourselves, and not worth the cab fare for just the two of us so we walk back into Puntarenas as well.

Before we walk the length of the pier we see Mary coming toward us. She looks worn out. We invite her to come with us and the three of us walk through the vendor stands and eventually sit down at an outdoor restaurant and each have a beer – an Imperial (Costa Rica’s beer). We visit for a while and talk about our day.

To our surprise a four piece marching band comes by playing for tips. One of the musicians, the trumpet player, is blind and walks with one hand on the shoulder of the guy in front of him. Mary would like a photo of the band, so I run to catch up with them, take a couple if photos and tip them. Beers finished, Mary returns to the boat while Jeff and I walk through the vendors looking at all their wares, but don’t buy anything.

Back to the boat, we get cleaned up and go sit downstairs in one of the lounges where I order a latte (thanks, Derrick and Jenn!) and Jeff has a beer – we are relaxing,  listening to a guitarist who is very good. Neither Jeff nor I are interested in the show tonight, so we sit and listen to the Romantica String Quartet, who play after the guitarist. We go to dinner and then up to our cabin where we just hang out on the deck.

What a great day…