Today’s the day! Today we go through the Panama Canal. I’m pretty excited and not at all surprise that when I wake up at 7 Jeff is already out on the balcony.

We know it is going to be at least an hour before the big event, but we want to find a good viewing spot. We head up to the Horizon Court Buffet to get some breakfast. The buffet is at the front of the ship so it is not surprising that the tables at the front windows are occupied. It looks like people have staked out their spots. We definitely don’t want to be here because all of the photos would be shot through the windows…dirty windows.
We grab a quick bite and head up and out to an upper deck in the front of the boat. Well, this isn’t going to work very well either. First of all, instead of standing, people are sitting in lounge chairs – taking up the space that 3 or 4 standing people could use; and if we could get closer, this area is also glassed in. We spot Leroy, he’s also looking for a spot.

We see people down below us, and there is no glass in front of them. Jeff and I immediately realize where they are and how they got there. There is a “Do Not Enter” door on that deck and yesterday it was taped off. Clearly today the tape has been removed! The three of us scurry down, ignoring the “Emergency Exit Only” signs, and find ourselves in the front of the ship, right against the rail with no glass in front of us. There aren’t a lot of people here and we are thrilled with our “front row” standing spots.

As we begin the approach, we hear Humberto’s commentary. Humberto, you may recall, is our “Destination Expert” and he will be doing a live commentary until 3:30pm or so, when we have completed our transit.

The title of today’s post “A Land Divided, A World United” signifies the importance of the Panama Canal to the world. The canal enables ships carrying cargo or people to save about 7,800 miles by cutting across Panama instead of having to sail around the Cape Horn, an extremely treachous route.
I won’t give you a lot of Panama Canal facts here as those are easily discoverable other places (and I’m not sure I have all of them correct), but I do think it was interesting that before the canal was completed, the world’s first transcontinental railroad traversed Panama.

The canal became operational in 1914 – think about that – 104 years ago and still in use! (Actually, it was roughly 400 years from conception to completion.) Thousands and thousands of people worked to make the canal a reality. At one point there were 6,000 men working to carve through a nearly 9 mile stretch of hard granite, the Culebra Cut, through a mountain range.

Anyway! There is now a new second set of locks in addition to the originals. The new locks are wider, built to accommodate larger freighters, container ships and, of course, mega cruise ships.

We can see the new ones as we come up to the Panama Canal. The new locks became operational in June 2016. But, I’m excited that we are going to traverse via the old locks because of their historical significance. Our ship, the Island Princess, was designed for the canals, even so, there will be a mere 5 feet (!) of clearance on either side of our ship.

We are sailing from the Pacific Ocean, passing under the Bridge of the Americas.

From here it is about 8 miles to the first set of locks. The whole canal transit is 48 miles and takes 8-10 hours.

As we drawer closer to the Miraflores Locks, a woman sidles in beside me to take some quick photos; it is becoming a little more crowded on our deck as people have discovered the secret “Do Not Enter” passageway. Everyone is very nice and polite about letting others into the front for photos. It is a fun atmosphere. The woman says to me, “I need to get some pictures for my husband.” “Oh?” I asked, “Where is he?”, thinking he was in another area of the ship.
“He’s quarantined in our room – he has influenza.” WHAT???? I want to tell her to move the HELL away from me!! She continues, “I’m a nurse. I knew he was really sick, so I took him to the ship’s doctor.” Then she says, ” Don’t worry, I’m fine; I’m taking antibiotics too so I don’t get sick.”
You should be so proud of me… I did not say, “I don’t care! Get the HELL away from me!” hahaha

The deck below us is reserved for ship personnel and one of the dancers has come out to sunbathe. I guess she’s been through the locks many times before. She is wearing a thong swimsuit – Jeff and Leroy convince the woman that her husband would appreciate a photo of THAT rather than some stupid machinery. And she did take the photo. LOL

Here we are coming up to our first set of locks.
Before entering, Humberto points out a small building on our left that has a big arrow on top of it. Before radio communication, that arrow pointed boats into either the left or the right locks. It is pointing to the right and that’s where we go.

The Miraflores Locks are in two stages and are about a mile long. Our ship squeegees into the lock. Part of the squeegee process involves the mules; originally, these really were mules,

but today they are kind of beefy little engines (not quite tractors) on a single track. Their job is to keep ships centered…remember we only have 5 feet of clearance on either side of our ship. Going through these two locks takes over an hour. 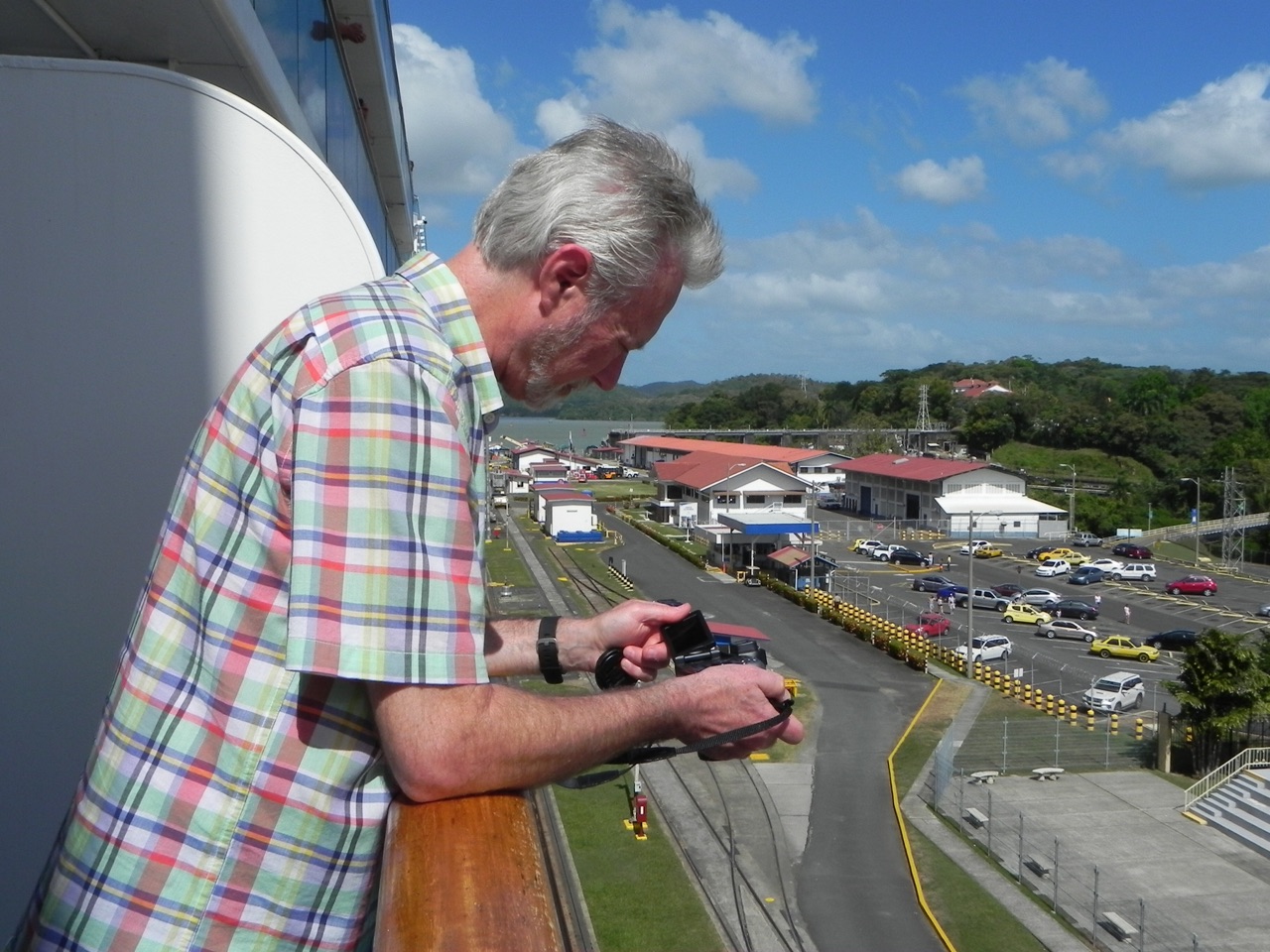 Apparently we are an attraction as well as there is a three story building off to the side with large viewing areas on all the floors. A mass of people are watching our boat rise in the lock. Everyone is shouting and waving. What fun!

After exiting the two Miraflores locks our ship is 54 feet higher than the Pacific Ocean. We are in the Miraflores Lake which is only a mile long and we are heading for the Pedro Miguel lock.

The whole process is repeated in the Pedro Miguel Lock, but without the audience. This lock is a bit more than 1/2 mile and raises the ship another 31 feet.
Now we are 85 feet above the Pacific. We sail out of the lock into the Chagras River, into the famous Culebra Cut, which takes us under the Centennial Bridge, over the Continental Divide, heading for Gatun Lake. It is the Gatun Lake that actually takes us across the isthmus of Panama. We look for crocodiles and enjoy the scenery.

We sail the river for quite a long time and go inside for a break and to have lunch. Jeff’s head has gotten pretty sunburned.

Late in the afternoon, we reach the Gatun Locks. These locks are in three stages and it is very weird because our ship is so high we can’t really see when the lock doors open.

Notice that the bridge swings aside! 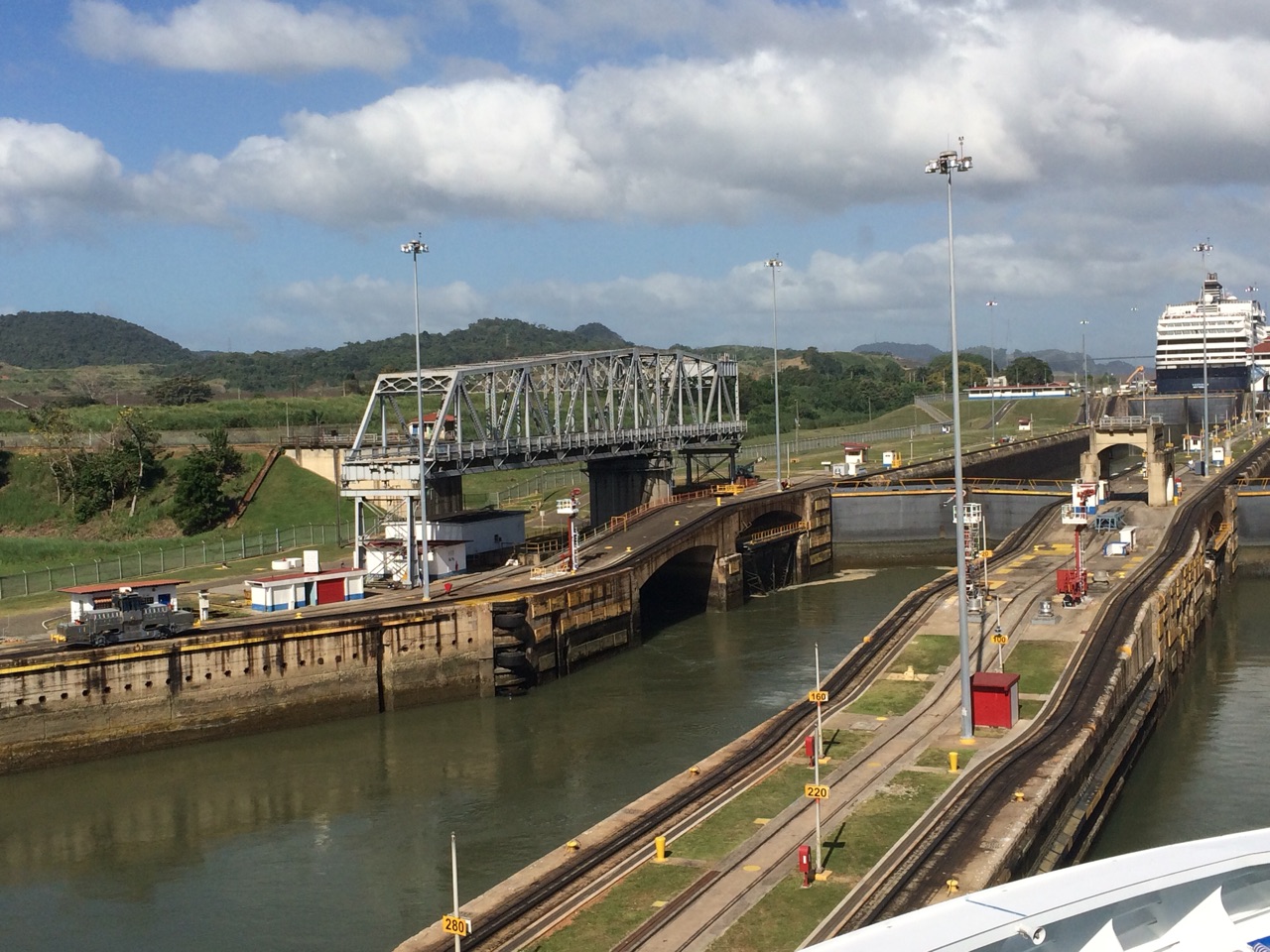 The Gatun Locks will lower our ship to the level of the Atlantic Ocean, so we are going to descend 87 feet within the mile long set of three locks. Jeff and I stand on our balcony for this part of the transit. The lock wall is right there! Someone a few doors down from us reaches out over his balcony railing and rubs the side of the lock. Down, down we go and too soon (though it did take a long time to traverse these locks!) we sail out of the Gatun Locks into a short, 2 mile channel that leads us into the Atlantic.
In all, the locks are flooded with 26 million gallons of water and that water drains out drains in 8 minutes! And I never did hear a sucking sound. haha

A full day – from the time we passed the Bridge of Americas until we entered the Atlantic was just over 11 hours. And what should one do after completing your first transit of the Panama Canal? Well, naturally you gather with your friends and drink a bottle of bubbly! 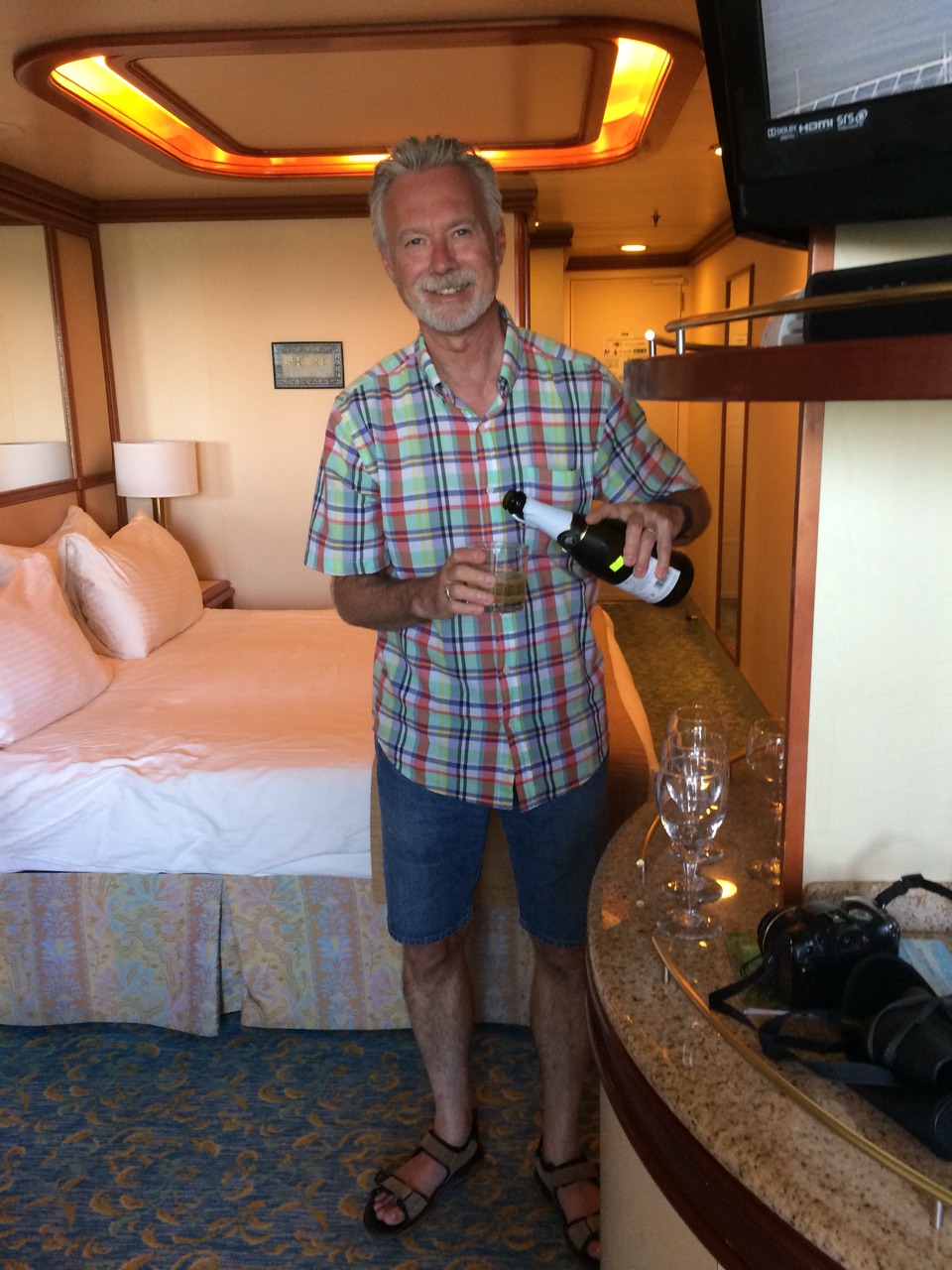