Today we got right up when the alarm went off – we have arrived in Cartagena, Colombia. Well, we’ve not yet arrived as last night’s strong headwinds and rough seas have put the Island Princess behind schedule, and several of our dresser and desk drawers have slid open from the ship’s rocking. Nevertheless, we get up, gather our necessary things for today’s excursion: hats, sunglasses, sunscreen, water, money and go to breakfast. I’m back to oatmeal and fruit, juice and coffee.

We’re to meet our excursion group in one of the ship’s restaurants at 8:30, so we eat quickly and head that way. When we enter the room we see Mary sitting at a table with others in her group. She points Eve and Leroy out to us, they are across the room and Eve is waving to us. We sit, relax and FINALLY the announcement is made that the ship has arrived and we have been cleared by the port authority to disembark. The staff in the dining room begin calling tour numbers. We are brown 11. Brown 1 and the Brown 2 are called; I decide to go to the ladies room – it will be a while before they get to us. As I exit the ladies, I see a mob of brown 11s coming at me! Oh, that figures! I meet Jeff, Eve and Leroy coming along carrying my stuff with them. There is a huge backup of people trying to exit and we see that the ship’s photographer is trying to take photos of everyone! Usually they do that once you are off the boat, and you can blow by them if you like, but here they are stopping everyone and there’s no way around. A ship’s senior staff member walks past us in the direction of the photographer. “He’s going to put a stop to that.” Jeff said and he was right. All of a sudden the line picked up speed.

Once off the ship, we find our group and begin to walk to our departure point. We chose today’s excursion – a harbor cruise around Cartagena on a Spanish galleon, because Eve and Leroy had booked it and we wanted to do at least one excursion with them!
The Spanish galleon was really cool looking…like what I would imagine the real thing would look like. Trish took a nice photo of the boat when it was out to sea. We are all hoping the excursion won’t be too hokey – and it isn’t at all.

Our guide, Alvaro, is very knowledgeable and he keeps up a running commentary – talking not only about the city sights, but also giving us information about Colombia’s educational system and health care.

For example, schooling up to, and including, university is free. Boys that graduate from high school are required to do one year of military service; those who do not finish high school serve for two years. Military service for women is not mandatory but is voluntary.
I think I understood him correctly when he said that after high school there is also a 6-month mandatory social service (volunteer work) requirement.
The emphasis and success of their educational ethic has helped greatly reduce the drug culture that was once so rampant in Columbia. The drug wars and other negative things that we’ve heard about in the past are really that – in the past. I remember reading in the New York Times before the cruise that Colombia is a great, safe vacation destination, so Alvarez wasn’t just saying that.

The other interesting thing I learned was that there has been healthcare reform in the country and the poorest people are eligible (they get a card) for free healthcare at any hospital whether that hospital is public or private.

The harbor tour was very interesting. The historic center of Cartgena is a UNESCO World Heritage Site. It was given that award for its “eminent example of the military architecture of the 16th, 17th and 18th centuries.” The city is surrounded by Las Murallas – considered to be the most impressive city walls in the world.

They were build by the Spaniards after an attack by Sir Francis Drake at the end of the 16th century. Apparently Cartegena was THE place to attack!

Also on board the galleon with us was a troupe of musicians and dancers. The first dance they did was Colombia’s national dance, the cumbia.

I learned about this dance in my Spanish class last semester and am thrilled to see it done live IN Colombia! The troupe did two more traditional dances and I really enjoyed them. 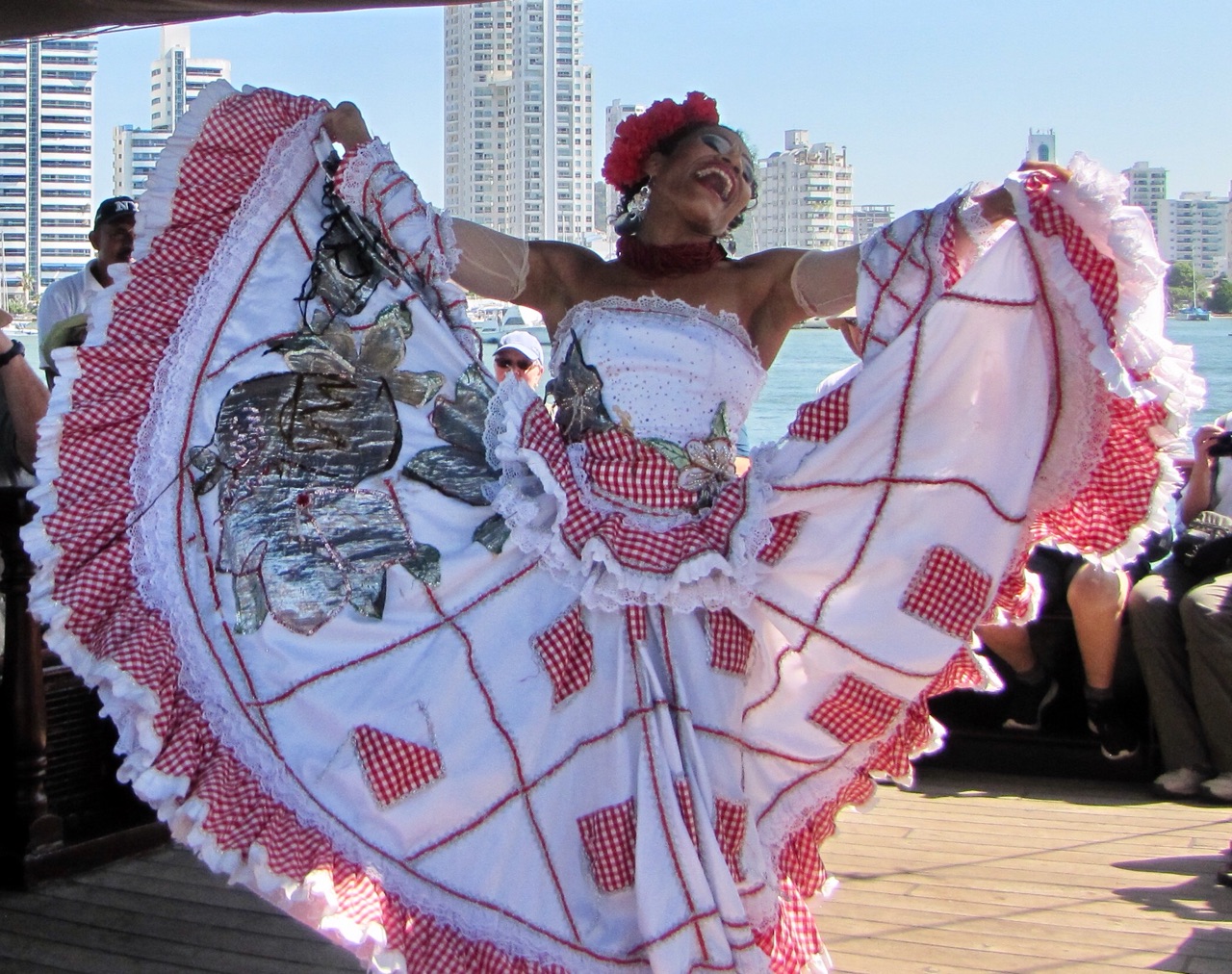 While everyone else is sitting in their little plastic chairs trying to stay in the shade, Jeff and I roam around. We are the only people in the front of the boat – very relaxing! It is time for our snack – Jeff and I each choose the local beer and a small bag of potato chips. Pokey and Gumby like the beer too – I’m starting to think they may have a drinking problem, I mean, it is only 11 a.m.

Unfortunately, at one point Alvaro choose me to dance with him. I’m a good sport so I do – I’ll never see these people again. Then I realize that Eve is videotaping our dance. Crap! I think some bribery may be in my future…

Our galleon returns to the harbor without firing a shot or attacking any other vessels.

We are now closer to the shopping area than to the boat, so Eve, Leroy and the two of us go to look at the souvenirs. And there is a little wildlife area there as well with flamencos, black swans, toucans and parrots. I spot a green iguana on one of the side sidewalks.

We spent a bit of time in the shop – it is air conditioned! Jeff gets his shot glass, I get my key chain and also some coffee. Jeff also picks up some small gifts for his staff. In case you are checking your mailbox every day looking for a postcard from us, you can stop! We have sent exactly 2 postcards on this trip (to our mothers). Now, in this store, they have postcards AND stamps AND a postal box along with a writing counter with pens! Of course all my address labels are back on the boat. So, I buy two postcards and send them to our mothers.

Packages in hand (Eve and Leroy didn’t buy anything) we stop to take photos of the birds and start the long, hot walk back to the Island Princess. When we get there, we see a HUGE line for boarding. Happily the crew are walking up and down the line handing out cups of ice water and wet face cloths. I pour my ice water on my cloth. Ahhh… Eve is wearing her wet cloth on her head – I should have taken a photo of that.

When we finally get to our cabin we find a note from Trish saying she is either playing “hoopla” (whatever that is) or napping.

Jeff and I go up to the buffet for lunch. I make myself a HUGE salad. We share a table with a couple, who I swear to you, did not say more than four words to us. I asked what they did today in port, “Walked around.” “Oh, how was that?” I asked them. “Hot.” And that was the end of that! When they were done eating, the man said “Have a good afternoon.” and they got up and walked away. The woman did not look at me once. Very weird and quite unusual.

After they left Jeff noticed a woman looking for a place to sit and offered one of our table spots. Thankfully she was very nice. Then we saw Mary sitting by herself about one table away and called to her to join us. She came over and said “Hello, Susan.” Turns out the woman Jeff intercepted is one of Mary’s “set dining” dinner companions! Also, turns out that Susan has a husband that arrived so we dragged another chair to our table. Then Eve and Leroy showed up and sat at a table across from us! There is REALLY good rice pudding on the buffet this afternoon. It takes a lot of willpower to limit myself to one dish.

Leroy and Trish both won a bottle of champagne at Hoopla so now we have four bottles of champagne. We all drank Jeff and mine yesterday –

Back in our cabin, Jeff is going to the Aruba destinaion talk, but I decide to skip it to work on my blog. When Jeff comes back he has a latte for me – what a sweetie! He lays down for a nap…between the heat and the early beer and lunch I’m tempted to join him, but instead I wash out some clothes in the sink and hang them up to dry.

After a bit, Trish calls to invite us across the hall for champagne – we aren’t going to turn that down! Jeff gets up, we don’t even bother to put on our shoes, but just pad across to their room.

We all toast one another – this is becoming a nice tradition. Then we learn what Hoopla is…it is a carnival game- the one where you get three rings and try to throw them over the tops of bottles. In this case the bottles were bottles of champaign and they were also the prizes. Trish said there were very few participants – she didn’t win, so the crew gave her another chance and just as one of her rings slid over a bottle top, Eve and Leroy came down the stairs. So, Trish called to them and they joined the game as well and…Leroy also won a bottle of champaign!! Now, our little group has four bottles of champaigne to drink in four days!

While we enjoy each other’ company we share our days adventures. Turns out that Mary’s tour, which was supposed to leave at 8, didn’t go until after 10! She went to an aviary and had a great time. Trish did a walking tour and she said it was very good as well.

Time for our friends to go to dinner, so Jeff and I change into jeans (the Atlantic side is cooler) and we went down to the atrium where we have been enjoying a sring quartet the, Romantica Strings, made up of four young women. They are very talented and we’ve spent a couple of early evenings listening to them. While I sat and wrote, Jeff checked out other cruises to book.

We decide to go to tonight’s show, it is a pianist named Tom Franek. Wow! He is very talented, quite impressive and did some fun stuff like stand on his head and play, and play while facing away from the piano. He, like the violinist, has an interesting back story. When he was in choir in high school, the choir had flown somewhere and on the way back he had an issue with his ears. His left eardrum burst (ouch!) and he has been deaf in that ear every since. He said that his deafness has been a big driver in his musical career – kind of proof the overcoming difficulties can inspire others. You can check him out at…

The boat, like last night is really rocking, with high waves and wind. Even rougher than last night. Jeff is out on the deck and when the moon starting rising it was so low on the horizon he thought it was a cruise ship – it was rising. He came in the cabin to get me. Oh! The moon was amazing. Through the cloud refection it looked elongated width-wise through the clouds. Incredible looking.

Now it is time for bed…