This morning we are up early, daypacks filled with sandwiches, cameras, and, of course, lots of extra warm clothing. Today we are going on a bus tour of Iceland’s Golden Circle. The Golden Circle is comprised of three of the country’s most famous natural wonders and you can see them all in a daylong circular (duh!) route. We board our bus, which is NOT a bus with ginormous tires (those are used for glacier tours), but a comfy tour bus and head out.  This is a glacier bus -> 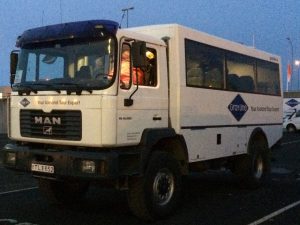 Our tour guide is a woman in probably her late 50’s; she is tiny and I suspect that she is actually an elf. An elf in a huge sweater and ski bib. She is prepared for the weather.

Let’s talk a minute about elves, trolls and the “hidden people.” These are very important beings in Icelandic lore and even today in the 21st century. Our guide, that little wisp of a woman, was filled to the brim with information, geological, historical and folkloric, and she told us a lot about the hidden people. The story goes that Adam and Eve had many children and that God would occasionally stop by to visit. (Maybe drop in for some wine and apple pie, I don’t know.) Anyway, one day Eve was very busy with housework was getting the kids cleaned up when she saw God coming up the walk. Knowing that there was no way she could get all the kids scrubbed up before God arrived, and she would have been so embarassed for him to see the children not perfectly presentable, that she told the unwashed kids to hide. God greeted Adam and Eve and commented on the beautiful children. “But this isn’t all of your children, is it?” “Yes.” Adam and Eve answered. Well, of course, God being God, he knew that wasn’t true and he told them so. As their punishment he told them the children they had hidden from his sight would be hidden forever. They became the hidden people. So, I figure the moral of this story is to have a huge honking tub that you can pitch all the kids into at once. And what kind of idiot lies to GOD to his face?

Our guide today, and our guide, Audher, on Sunday, told us that there had been surveys and such in Iceland to determine the percentage of the population that believes in the elves, trolls and hidden people. The number is HUGE – though Audher did point out that the question was phrased along the lines of “Do you deny the existance of the hidden people?” Not “Do you believe in the hidden people.” Audher said that she would not deny that they might exist…

This mythical culture is so much a part of country’s psyche that there is even a beautiful, jewelled and ornate gown on display in the National Museum. The dress was given to a human woman by an Elfen man in gratitude for her service to his wife as her midwife. I don’t remember all the details of the story, but the fact that the dress is on display in the National Museum is interesting, don’t you think?

So as we rode on the bus, looking out at the landscape, our tour guide (I’m very sorry I didn’t write her name down) regaled us not only with geographical and historical details but also with these wonderful folkloric stories.

Our first stop on the Golden Circle is Thingvellir National Park, which in 2004, was made a UNESCO World Heritage Site. Thingvellir is Iceland’s most important historical site, in fact, this is a very important site for all of the world’s democracy. It was here in 930 AD that the Vikings established Althing the world’s first democratic parliament! There are some ancient ruins marked – a flagpole shows where the Althing’s podium stood; there are a few remains of where those attending the parliament camped.

Thingvellir, once the Christians arrived, was also where men were hung and women drown for adulterous behavior.

But the reason I am so keen to see Thingvellir is that it is one of two places in the world that can be referred to as a “Rift Valley.” The first Rift Valley Jeff and I saw was in Kenya, and I had no idea of its significance. Our traveling companion, Tom, tells us that Thingvellir is where the American and the Eurasian tectonic plates are pulling away from one another.
Yes, it is where these two plates are pulling the continent apart! At a rate of 2 centimeters a year!

Our photos show a big, tall mountain on the left and a much lower wall on the right with a path down the middle. The mountain and the wall were originally one but the plates have pulled the earth apart and created the rift in the middle. To see the evidence of these tectonic plate shifts, to realize that this is how our continents were formed is just mind boggling. 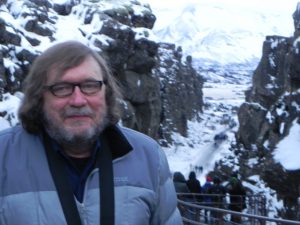 We walked down the rift, between what will be ages and ages from now the break between two continents, and took a lot of photos 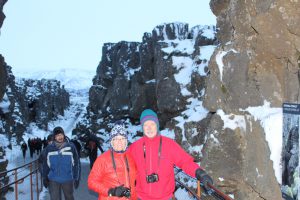 including these sheep along the trail. T 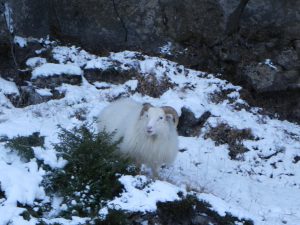 hese sheep were a lot more sure footed than Jeff. Tom, Jeff and I went up some icy wooden stairs to an overlook. At the top, a woman cautioned us to step to the left to avoid a very icy patch. Tom and I cautiously shuffled to the side; however Jeff moved forward and boom – landed right on his wrist. Ouch!! Sprained wrist…no biggie.

He composed this riddle right away:
Q: When you fall in Iceland, where do you land?
A: You land on the ice because it’s ICE-land!

We return to the bus and travel on. The landscape is interesting – there are deep long ravines through fields. Our guide tells us that the people, and even the animals, in this area know better than to walk through these fields, because sometimes there is a thin layer of soil over these ravines. The land here is very unstable. 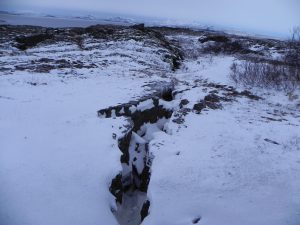 Stop number two: Gullfoss or Golden Falls. This area is a unique and fascinating geological site. Gullfoss is a really dramatic double cascade waterfall that drops about 90 feet. But what is most interesting to me is the route of the water. It comes from an ancient glacier and travels underground, then appears above ground here and goes over the “fall” which is actually an ancient underwater sea cliff! This entire area was all underwater eons ago. Fascinating!

The falls are still flowing though a lot of the area has frozen – gigantic frozen icicles that are really a waterfall. Cool…and very cold!

Gullfoss is also our lunch stop; there is a restaurant, gift shop, etc., all ready for the heavy tourist traffic, and we can tell from the parking lot that they do get a lot of visitors. There is a very large glassed off banquet style room overlooking the falls. It is clearly setup for multiple incoming bus tours. 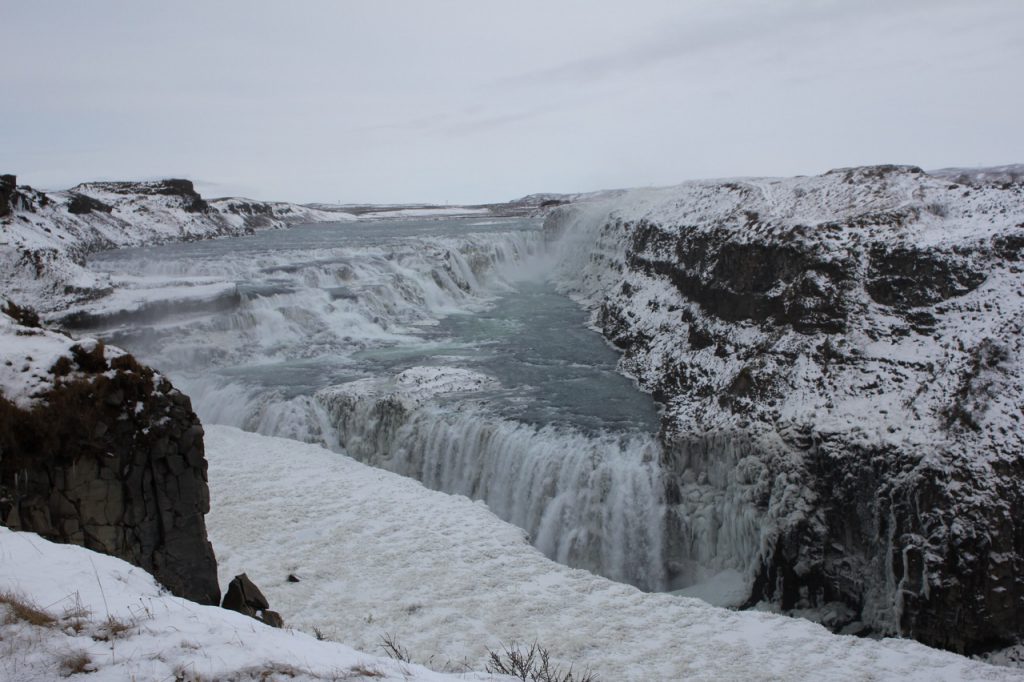 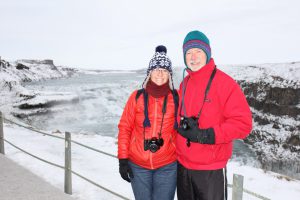 We sit in the smaller restaurant. Tom and Jeff have the organic lamb stew, a local dish. They say it is delicious. I have a homemade tomato soup which is very good and there are free refills on the soups. Despite the signage that stipulates “No outside food or drink.” I pull our sandwiches and my thermos of hot coffee from my backpack. Just let them try to take my pb&j!

Sitting in the warm restaurant we realize how tired we are – our late night watching the Northern Lights is catching up to us.

Back to the bus, we’re heading for stop number three, our final stop: Geysir. According to my guidebook, all spouting hot springs are named after Geysir. At one time, Great Geysir erupted on a semi-predictable schedule until it didn’t. It stopped. In efforts to make it erupt, tourists in the 1950s, threw rocks and trash down it. It would have served them right if it HAD erupted and spewed that trash all back on top of them. But it didn’t. 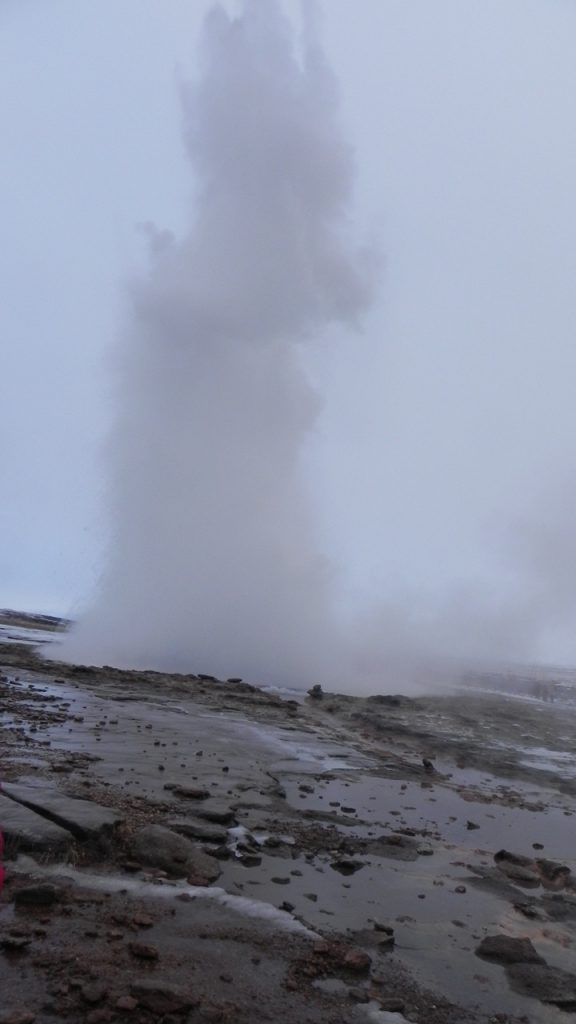 After two large earthquakes in Iceland in 2000, the Great Geysir roared back to life! It continues to erupt, but infrequently. We didn’t see it go off, but had a wonderful time watching the world’s most reliable geysir, (take that, Old Faithful!), Strokker. Stokker erupts every 3-7 minutes – and the billing was true – it was amazing that this geyser erupted time and again; and not always just one spewing, but we saw double and triple spoutings one right after the other. Imagine the amount of pressure needed to shoot hot water 45-90 feet into the air so constantly! Imagine also the amount if ice that this spewing water, steam and runoff create when they hit this cold air. We were super careful walking around.

We left the geyser area to walk by bubbling hot pots and steaming holes in the ground….back to the bus.

As we are driving back to Reykjavik, I notice a town sign for Laugarvatn. That’s the town with the Fontana Thermal baths that we enjoyed last night. Boy, that would feel good now…

Soon afterwards our bus pulled into what actually is our last stop on the tour. We are visiting the Fakasel Icelandic horse park.

Note that these are not Icelandic ponies, like I thought, but are really full grown horses. These horses were imported from Mongolia and are the only horses permitted to be imported/owned in Iceland which keeps the breed pure and prevents the importing of diseases to which they have no immunity. Obviously, being from Mongolia, the horses are well suited to the Icelandic climate. These horses are known for their smooth, distinctive gait; and they are way cute!

We wandered around the store for a little bit; I thought the bathroom doors were fun.

And then it really was time to head home.

Dinner in our hotel is a typical Jane and Jeff affair…the three of us meet in our room, boil some water in our hotpot and pour it into our cup of pasta (Tom), cup of curry noodles (Jeff) and cup of vegie soup (Jane)