Last fall, August/September of 2017, Jeff and I spent two weeks on St. Maarten. Well, actually we spent the first week sailing around it and nearby islands on a catamaran; the second week we actually spent on the island at the Little Divi Beach Resort. We left St. Maarten five days before it was devastated by hurricane Irma. Of course, we saw the subsequent news reports of the terrible impact the storm had on the Caribbean and are anxious to visit the island and see how it is doing.

We signed up for an excursion today – before we realized it would require us to be upright and off the boat ready to go at 7:50 a.m! It is okay though because this is an important excursion – it falls under the idea of “traveling with a purpose.” Our excursion group is going ashore to help, as much as we can in the time we have, with the island’s recovery.

We board the bus to our first stop which is St Maarten’s National Institute of Art. The Institute has been instrumental on the island in helping children and young adults deal with the trauma, fear and loss they experienced during and after hurricanes Irma and Maria.
When we arrived we first were greeted by the Institute’s director and then heard firsthand from two teenagers what they went through during the storm…having the roof of their house blown off as they struggled to the second floor to escape rising water. Leaving a parent to try and hold a door closed while the children tried to escape and not knowing if their father was dead or alive. It was, of course, powerful testimony and very moving.

The Institute uses art and music as therapy and today we are going to do a little of both. Our group is split into two. One group, ours, is going outside to paint a mural on the wall surrounding the building. As we go toward the door, it begins to pour rain, but it passes very quickly. The staff dry off the wall as we select our brushes and paint colors. There are line drawings already on the wall and we are basically coloring them in, but many of us provide our own little flair. I don’t have an artistic bone in my body but this is something I really enjoy. It is just like coloring except on a larger scale.

We make a good deal of progress on the wall before our time is up. Now the other group comes out and we go in. Inside we are given our choice of many percussive instruments including a wide variety of drums.

Then the instructor teaches us several different types of rhythms and we all play together. This is wonderful…we play for a while, then everyone chooses a different instrument and we learn more about Caribbean music and rhythm. After our percussion lesson we go outside to see that the mural is finished and it looks fantastic!

We’re so happy to have been a part of this. 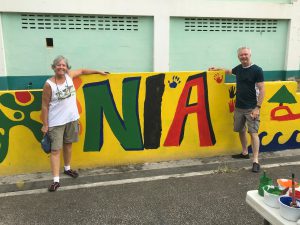 Back inside we have lemongrass tea. It is in one of those big coffee urns and one of the staff opens the lid for me to see in. It is filled with what looks like weeds! “It is lemongrass that I pulled out of my yard this morning,” she tells me. She simply put the lemongrass in the pot and added boiling water. It is delicious.

Time to go on to our next adventure though it is hard to leave the Institute where the staff, director and kids are so appreciative.

Back on the bus, we are driving to Mullet Bay to do a beach clean-up. When we arrive, we hear a short lecture about the impact of plastics on the ocean environment…and, of course, plastic is everywhere. Each of us picks out a pair of work gloves and are given a burlap sack. Our job is to pick up all the trash and stuff that just doesn’t belong on a beach. When our bag is full we bring it back to be weighed because this beach cleaning is part of an international movement and there is a site/organization that keeps track of the amount of trash cleaned off the world’s beaches. After your bag is weighed, you then throw the trash in a dumpster and begin again. I don’t know how many plastic straws and water bottles, glass beer bottles and styrofoam take-out containers I picked up. I found a big piece of plastic sheeting that looked like it had blown off of someone’s roof. It was kind of horrifying that it took so little time to fill my sack. While I was picking up stuff a woman, a taxi driver, called out to me, “Hello! Are you all part of a group?” I shouted back that we were off the Princess cruise ship. She thanked me/us for “helping my island”.  It was very gratifying. My second time out, I lugged out a huge piece of cardboard that turned out to be infested with biting ants. Ow! It was way too big to put into my bag so I dragged it across the parking lot, swatting ants off my hands and arms the whole way. My final round of trash pickup was three wooden pallets. Seriously? They were really awkward and heavy and weighed a ton; or felt like they weighed a ton as I was dragging them. They were very difficult to weigh, so we got one weighed and estimated the other two.

Jeff and another man helped me get them to and into the dumpster.

We had only about 45 minutes for our cleanup, but we brought in close to 500 pounds of trash!! And I came in 2nd for the amount collected! (The first place person picked up 5 more pounds than I did.) Now we’re all sweaty and hot but have a wonderful feeling of accomplishment.

Back in the bus to return to the ship, we see a lot of evidence of hurricane damage. In fact, when we visited in September 2017, a couple we met, Les and Cathy, were staying at the Royal Sonesta resort. Today there are bulldozers leveling it…. The whole resort is a total loss. Unbelieveable.

As we drive through the capital of Phillipsburg to the cruise ship, our guide offers to drop off anyone who wants to shop. It is an easy walk back to the boat from here. We aren’t interested in shopping, but we do want to see how the city fared so we get off. Also, we know that if we went back to the ship and got cleaned up (or sat down!) we wouldn’t be interested in going out again.

The streets are familiar as we walk to the main boardwalk. This is the tourist area with waterfront restaurants, bars, beach chairs and umbrellas. Many of the building on the boardwalk still have smashed windows, boarded up windows and doors, missing roofs covered with blue tarps.

There are people working on buildings everywhere we look. But the boardwalk is bustling…the sidewalk  vendors are selling goods and the little restaurants and bars are serving food. Because tourism is the major economic driver here it was imperative that St Maarten be able to handle cruise ship tourists as quickly as possible after the storms. Today there are four cruise ships in port! We walk the entire boardwalk and then back to the ship. One on hand we’re happy that progress is being made on clean up and restoration and on the other hand sadden that there is SOOO much more that needs to be done.

Before we return to the ship, we stop at a duty free shop for a bottle of wine which I slip into my bag. We pass through ship security and the x-ray; no one notices or mentions our contraband wine. Yeah!

Back on the ship we take nice cool showers and put on clean clothes. Today I wore one of my favorite tank tops – it is one I bought in St Maarten last fall. When I took it off I saw that apparently I had brushed up against the wet paint of the mural and there is a large blue paint blotch on the back of my shirt. At first I was unhappy, but then it made me smile – that blue blotch was a reminder of my attempt to help St Maarten recover – so appropriate that it is on my St Maarten shirt!

Since we haven’t eaten since very early this morning we go up to the buffet for lunch. Being tired and starving, I did not make great food choices, but everything was delicious and I probably worked the calories off on shore. Now its time for a little nap or time to relax out on the balcony.

Jeff and I walk around to the back of the ship to watch the sunset before going to dinner around 7:30 or so, and after dinner we plan to go to the Movies Under the Stars. First though a quick stop in our cabin where Jeff puts beer into our little cooler and I mix a gin and tonic in my water bottle. We are going to see Jumanji. I love Duane Johnson (“the Rock”) and am looking forward to the movie. Neither Jeff nor I saw the original Jumanji starring the late Robin Williams so we don’t know the premise of the movie. Hahaha! The movie was hysterically funny!! Even a short rainstorm couldn’t make us budge from our lounge chairs. And, true to form, the popcorn was delicious. This was a relaxing way to top off our day of service.

Back in our cabin we stand out on the balcony and watch the ocean go by.