Our first port stop is today and we are in Puerto Vallarta, Mexico. 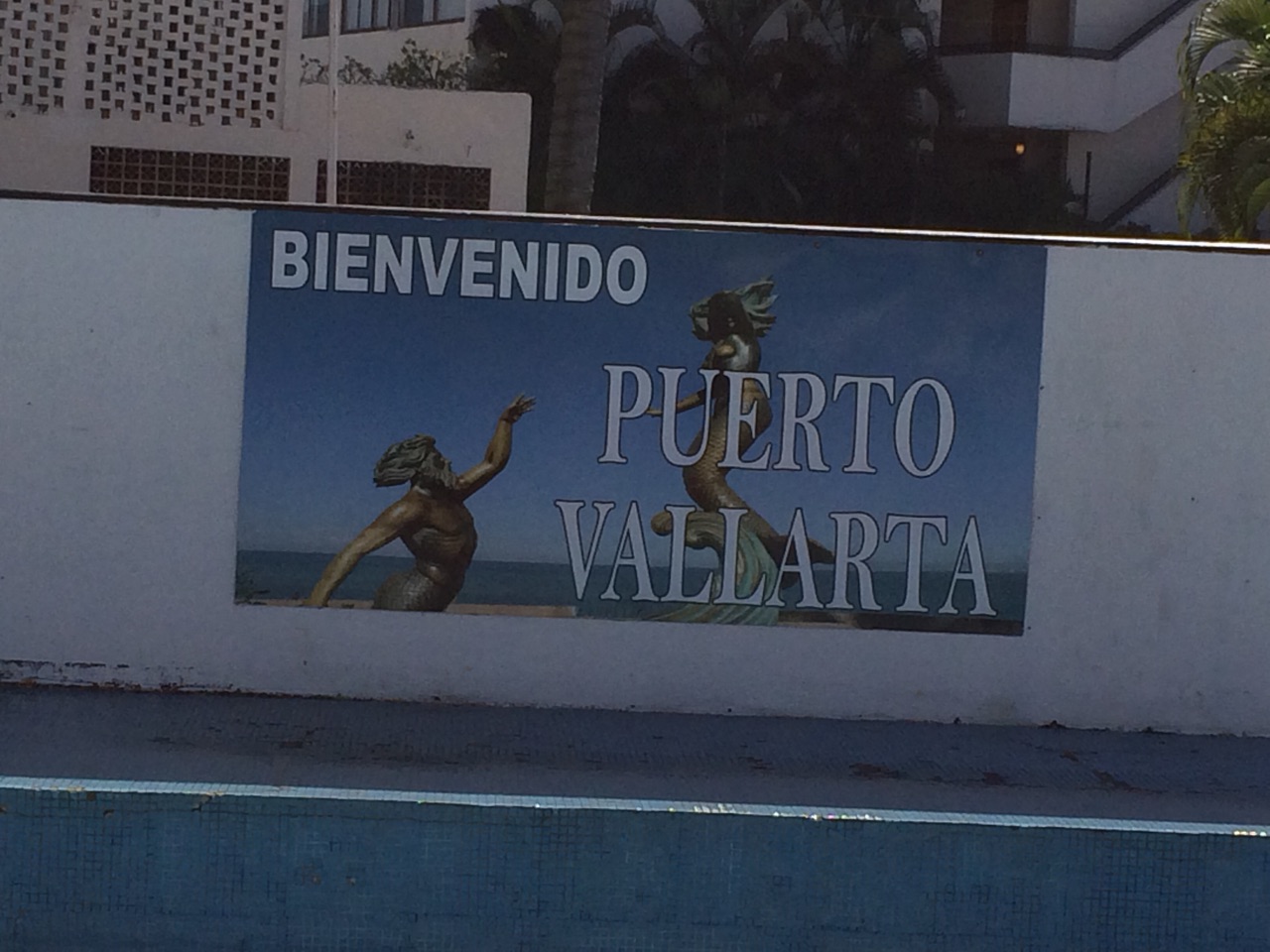 Jeff and I have been here several times and we have booked a whale watching excursion.

Puerto Vallarta is where Banderas Bay, the 7th largest bay in the world, is located and it is to this bay that the humpbacks in Alaska make their way south beginning in late December/early January through early April. We are at the beginning of the migration. The Bay of Banderas is the breeding and birthing grounds of humpbacks and dolphins and we’re hopeful that we’ll see some whales.

We have a quick bite of breakfast and join our group. We board a mid-sized rubber dingy that seats maybe 20 people. Jeff and I, bringing up the rear of the group, end up sitting in the very front two seats of the dingy. Perfect! 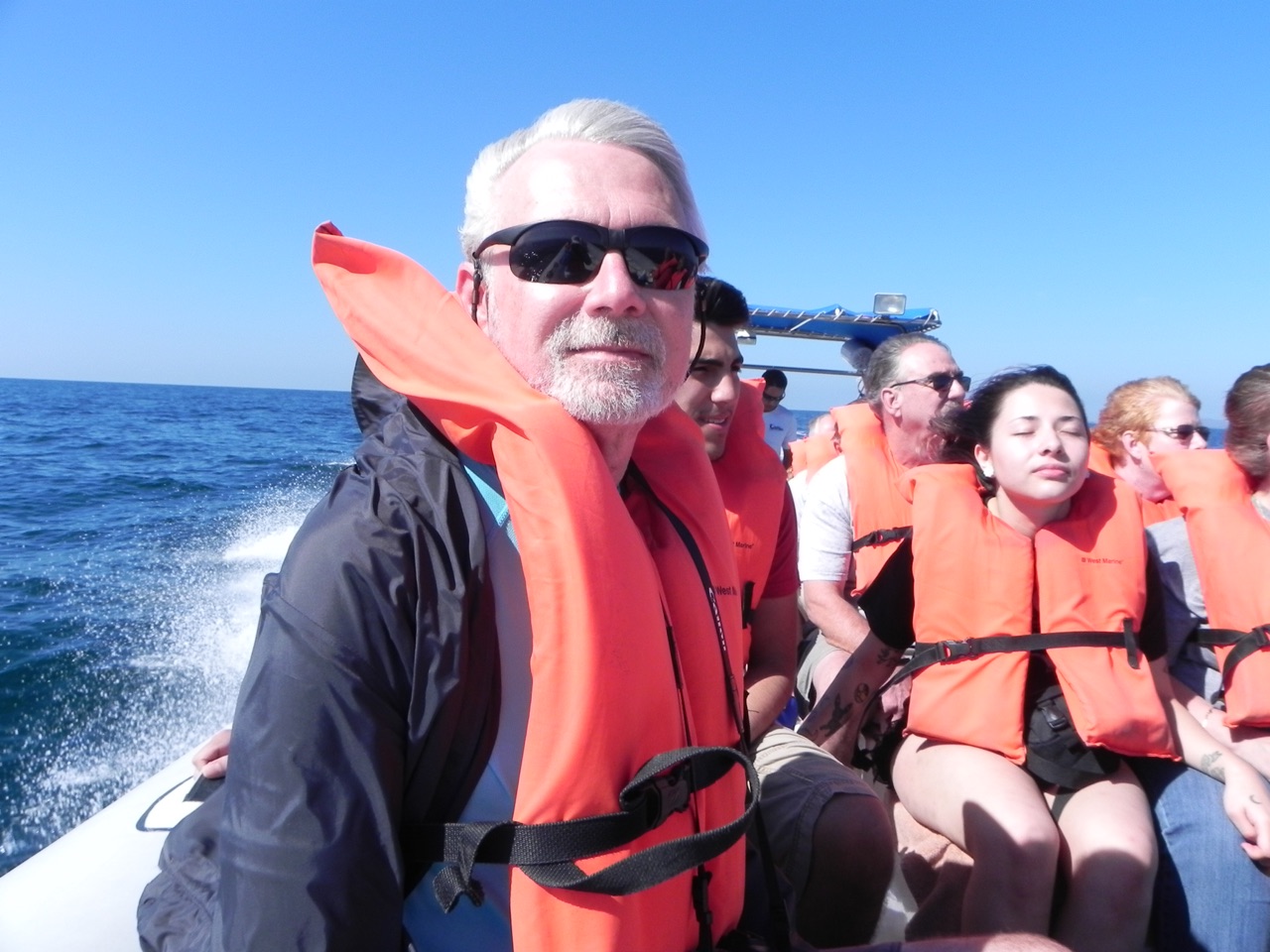 The company that Princess Cruises has contracted for this excursion is Vallarta Adventures. Jeff and I have used them personally when we were on vacation here and they are really top-notch. Today they have several boats in the water looking for whales and they use a small airplane to spot pods. Using radios they contact the dingys with locations.

We set out at a fast clip – bouncy, bouncy (which I love). Jeff and I have been whale watching several times, but on our boat there is a young woman who has never been and she is practically quivering with excitement.

Our guide tells us that typically during the migration there will be upwards of 800 whales in the bay; but last year, because of El Nino and the warmer water, there were only 100 or so whales during the entire season. Disasterous!

There are many rules here regarding whale watching and they are strictly enforced by the boat operators themselves. First, a boat can only come within a certain distance of the animal. If the whale swims toward your boat that is okay, but you cannot crowd it. Second, only four boats are permitted to be viewing a whale or pod at a time. If another boat comes up, it must hang back until one of the original four leaves (and we saw this rule in action); finally, the third rule is that boats are limited to a viewing spot for 30 minutes before they have to move on.

Everyone in the boat is responsible for spotting and soon someone shouts “11 o’clock” and points. Sure enough we see spouting…multiple whales! Our boat heads in closer.

We’ve come upon a breeding pod!  There is one female being pursued by 5 or 6 males. The males are fighting for dominance and there is a lot of splashing, diving and surfacing going on. Very exciting! The photo here is one of Jeff’s taken at this pod.

Wow, we were lucky to see that! We watch for awhile and the group moves farther away.

Our dingy goes speeding off in another direction. Another breeding pod! Again LOTS of action, spouting and splashing. In our experience, when a whale surfaces and clears its blowhole, the sound is like that of a loud exhale. Now though we are hearing many different noises…the normal exhale sound and a new high pitched ‘whee’ and what sounds like grunting. There are so many whales it is difficult to get good photos because as they spout and dive and roll about I’m only getting shots of splashing water. The young, excited woman is devastated because her camera batteries have gone dead…she has a camera similar to Jeff’s, so he pulls out his spare batteries for her, but they are the wrong size. He then suggests that she put her media card into his camera and use it, but she didn’t. Who knows why, but she was young and probably embarrased.
The whales disappear under the water and our guide tells us that we’ll wait 5-6 minutes in this spot for them to resurface. If they don’t come up within that time, they have deep dived and are moving on. And they did move on…

Now our dingy is racing further and further out in the bay – there is a humpback mother with her baby!! OMG!! We learn that the baby is less than 2 weeks old. The guide can tell because the baby’s dorsal fin (the one on top) is still folded over a little. The mother protects her child by keeping herself between our boat and her baby and when she dives it is a shallow dive because baby’s lungs are not yet developed enough for deep diving. When baby humpbacks are born they weight approximately 2,000 pounds and put on about 2,000 pounds per week. (Kind of like me on a cruise ship!)
Before the humpbacks arrive in the Bay, the Orcas show up. Okay, first of all, for those of you who do not know, orcas are NOT killer whales, in fact, they are not whales at all, but are actually dolphins. And their favorite meal is baby humpback! So, the orcas arrive before the humpbacks and just wait for the babies to be born.
Mommy humpbacks tend to keep themselves and their babies close to shore for safety.

Our tour is scheduled for 2-1/2 hours and suddenly 3 hours have passed. Our dingy goes screaming back to port, Jeff and I are hanging on, bounce, bounce. There are whales all over!

And suddenly the boat abruptly slows because there is a large pod of dolphins right in front of us. We slowly split the pod and now there are dolphins on either side of our dingy. Dolphins, though they have smiles on their faces, are very territorial and several of them are slapping their tails hard in the water – this is their way of saying “get out of my space!” I never knew about the tail slapping and it is interesting to see.
What a great adventure!

Though our tour was a little longer than it was supposed to be, we still have plenty of time left in port, so we get back on the Island Princess, clean up a little bit, grab some cash and head out to WalMart. Yes, you read that correctly. There is a WalMart directly across from the cruise pier – and since the last time we were here, a Sam’s Club has gone in next door to WalMart.

We need to get to WalMart to buy vanilla and we know they have the very best prices. I buy two 1-liter and one 500 ml bottles of pure Mexican vanilla for gifts. The big bottles were $8. Happy Birthday, Janet Smith!!

Mary has caught Eve’s cold so we also pick up two boxes if cold medicine (one daytime, one nighttime). They were a Sudafed type of cold medicine for $2 each. Afterwards I told Jeff that for that price we should have bought several boxes! We got 2 more bottles of wine and I got a couple of postcards as well.

Back on the ship again, as we walk by the liquor control table, I loudly say to Jeff “Well, honey, I think we have enough vanilla for the rest of our lives” and no one questions us so we’ve snuck more wine on board.

It’s time for sail away, so we barge in on Trish, Mary, Eve and Leroy. Jeff opens Trish’s champagne and we toast our first port. I think everyone is having fun…Trish and Mary regale us with stories of their day and since Trish says “If you open a bottle of champagne, you have to finish it” the four of us empty the bottle.

They go off to dinner and Jeff and I went to our daily cocktail party. I’m looking forward to tonight’s gathering because they are serving guacamole and chips, and I really like their guacamole. The drink of the day is a margarita and is yummy.

We have saved room for dinner and again tonight enjoy our companions. It is a lot of fun to be meeting so many different people, and hearing how they spent their port day.

After dinner, we go to the late show in the Princess Theater to see Jerry Goodspeed. He is a ventriloquist and is very good. We have never seen (heard?) a ventriloquist do two voices simultaneously which he did when he had two of his dummies sing a duet. Amazing! I know it sounds hokey but he really was entertaining.

It’s been a long day…but what fun! Tomorrow is a sea day; I hope you will join us as we sail toward Nicaragua.