It is 20 some degrees in Denver and snow is on its way. It’s time to get out of Dodge! Though, truth be told, we’ve had this trip planned for over a year and the time has finally arrived. Jeff and I, and our wonderful friends, Eve and Leroy Measner, Mary Linscome and Trish Nelson (who is Eve’s sister) are all taking a 15-day cruise from Los Angeles, CA through the Panama Canal and ending in Fort Lauderdale, FL. What a great way to start the new year!

As an example of our semi-lack of coordination, the six of us are on four different flights, but five of us (Mary, Eve and Leroy and Jeff and I) arrive at LAX about 30 minutes apart – that’s the plan anyway. Trish is getting to LA tomorrow. We are leaving early because you never know what the weather in Denver will be in January.

Since our flight doesn’t leave until 5:30, Jeff and I spent some time dinking around the house, then we pile our luggage into Tom Delaney’s car and head for Denver. The weird thing about this is that TOM is not in the car! He is spending some time in Denver. Since we have his car, we’re going down for a quick visit and to drop off his car. Then we’ll take a cab to Denver’s Union Station and catch the new (6 month old) “A” train to Denver International Airport.

For those of you not familiar with the “A” train, it is a big deal. It runs from downtown Denver to DIA every 15 minutes and is only $9 per person. In spite of a YEAR of testing however, the A train has been plagued with issues…like losing power and stranding travellers for hours; having the RR crossing gates malfunction and a variety of other ails. But we’re always up for an adventure…
The A train is WONDERFUL and such a relaxing way to get to the airport and we experience no problems at all. Whew.
Getting off train, we have plenty of time before our flight (We had factored in possible delays.) so when we see a small room on the train platform marked “Bag Drop” we walk in to explore. Well, hot diggety! We can drop our luggage for our flight here and go into the airport unencumbered with our THREE suitcases.

Yes, THREE suitcases. The King and Queen of packing light have tumbled from their thrones – but there is good reason for this over-abundance of stuff. Our largest suitcase has all of our snorkelling gear and formal wear along with 3 large bags of Hershey’s chocolates, a big stack of Spanish children’s books, a pile of notepads, bags of new Sharpies and some pens.
Scratching your head?
Well, Poudre Library District, of which Jeff is the Finance Officer, has a sister library in Nicaragua…specifically, San Juan del Sur, Nicaragua which just happens to be one of our port stops. We are meeting up with some library folks there to have lunch together and hand-off our goodies.

You know, Murphy’s Law is so true. We made sure to allow plenty of time at the airport and now our flight is delayed 90 minutes. Crap. A few minutes after this announcement Eve and Leroy magically appear at our gate! They are in a completely different concourse and have come to find us. Their flight, on a different airline, is still on time. We chat for a few minutes and they hurry back to board.
Jeff has arranged a private shuttle to pick the five of us up at LAX and take us to our hotel, so our traveling companions are kind of stuck until we get there. Jeff contacts the shuttle people to inform them of our later than anticipated arrival – all set.

Now our flight time has changed to earlier, so our delay is less. Yippee!
Here’s a plug for for Delta Airlines…their movies and beverages (non-alcoholic) are free and they give you snacks! The seats were comfy, and the tray tables and seat back pockets were full size. Very nice and knocks the socks off of Frontier.

I indulge myself with an Avengers movie, something I would never pay to see, but for free… And about 4 minutes before the movie ended, the plane’s wi-fi was turned off for landing. I pitch a little hissy fit because I don’t know who won the battle. HAHAHAHA!

When we got to LAX we found Mary, Eve and Leroy waiting for us at baggage claim. Mary cracked us up with her “Smith/Barnes” sign. 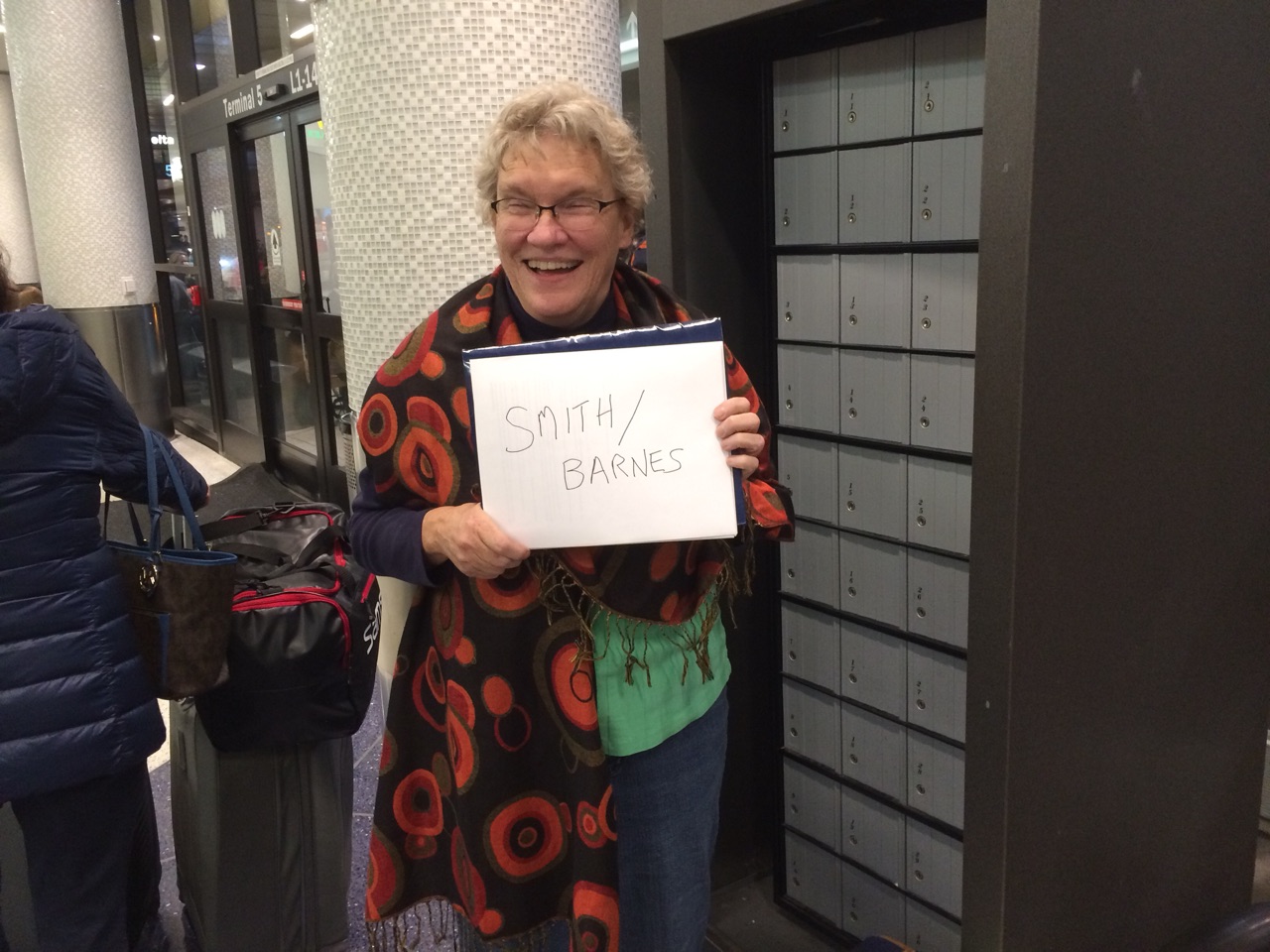 We headed outside for our shuttle…which took almost 40 minutes to arrive!! We were so tired and annoyed, but at least there was some excitement because as we were waiting for the shuttle, three firetrucks and a Battalion Chief’s truck came screaming in, lights and sirens at full blast. One of the trucks freaked me out a little because it pulled right up on the sidewalk. 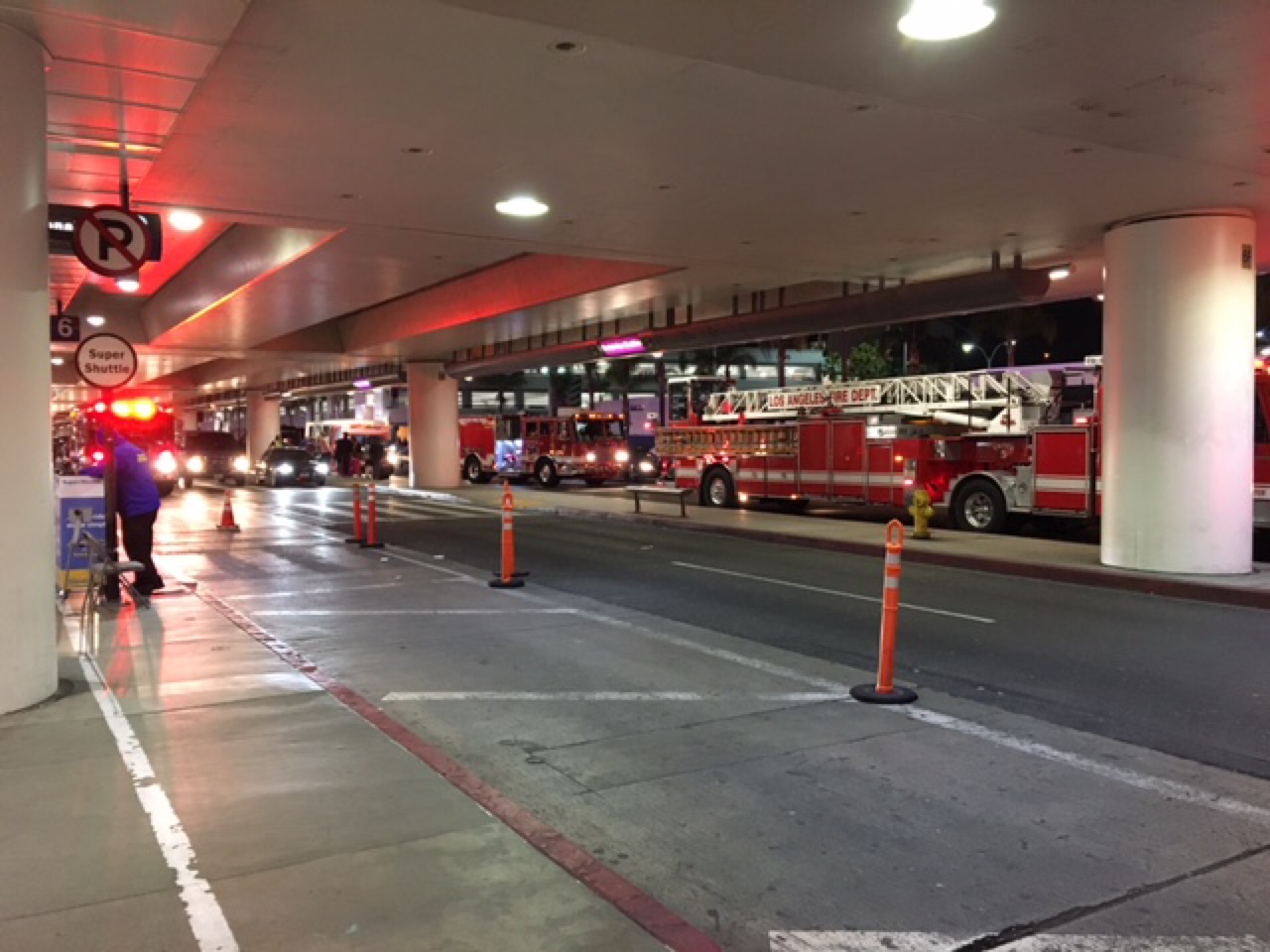 Turns out there really was a fire – at Starbucks. See, Tom D., I told you they over-roast their beans! LOL

Finally we get to our hotel and all of my aggravation melts away when the desk person upgrades Jeff and I to a suite on the Club floor and, because they’re with us, upgrade our companions to the Club floor as well and our rooms are all close together.

Our suite is especially nice because it is a corner room with loads of windows. In the living area we have a city view (of San Pedro) and in the bedroom we can see the ocean, the cruise port and the city. Sah-weet!

Its been a long day – time for bed!